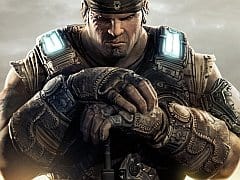 Gears of War defined a console generation, but in 2011 it has almost become a victim of its own success. The signature third-person cover system has become commonplace, and plenty of its tropes have become weary from third-party overuse, such as the needless mini-cutscenes that play out as your team break through locked doors. Yet when all is said and done, and everything has been torn open by chainsaw, torque bow and shotgun, it’s clear Epic’s third entry in its flagship series has far more meat on its bulky bones than the legion of imitators.

All of humanity’s splintered remnants, including the women, have taken to the chest-high battlefields of Sera, these grunting hulks of sinew and muscle wheeled out for the trilogy’s explosive conclusion. Yet underneath this buoyant machismo Epic plays its hand with an incredible modesty, crafting careful set pieces, nimble environments, and an intimate and considered suite of multiplayer modes.

Even though Gears of War 3 rarely plays it straight – it’s a game that proudly features lines such as “speaking scientifically, we’re gonna blow its brains out its ass” across its lengthy 10 hour campaign – the third chapter’s denouement triggers a downbeat shift in tone so significant that even Damon Baird and Augustus Cole (undoubtedly gaming’s best odd couple) temporarily halt their wisecracking smack talk.

The game’s campaign is of impeccable quality and solid construction, though Epic is clearly not pushing its considerable talents when it comes to creative level design. On one hand this is preferable, and it’s easy to say good riddance to the fiddly vehicle sequences that blighted the first two games, but it’s also a shame that there isn’t the adventure and variety of Gears of War 2’s Rockworm, or the controllable cover of the Locust burrow.

An early opening sequence in Hanover is a notable exception, with Cole walking through the nostalgia-filled alleys and supermarkets of the town where he was once a superstar. In a brilliant juxtaposition that’s either the result of fluke or genius, the game flicks from a surprisingly tender moment of recollection (and I never thought I’d attribute such a sentiment to the bombastic exaggeration that is the Cole Train) to a sequence played successfully for laughs. It’s a wonderful moment.

Much of the five-act campaign revolves around a simple thematic question: with the world completely ruined, what is left that’s worth fighting for? Each of the bulging ensemble cast has their own answer: Marcus soldiers onwards for his father, Baird and Cole do it for the comic relief, whereas stalwart sidekick Dom plods onward without purpose after the events of the second game. Clayton Carmine, whose fate Microsoft has expressly forbade me to divulge, does it for the sweet kills.

Alongside the fist bumps, biceps and brouhaha lies a deeply personal story – both design director Cliff Bleszinski and production director Rod Fergusson have spoken candidly about the impact of their fathers (or lack thereof) on their lives, and the third Gears of War finally brings those affectations, bubbling underneath the surface for two games, to the forefront of the campaign. Basically, Gears of War 3 is a tale of headshots and family.

The game is also a showcase for the brotherhood of creative code wizards at Epic, and much of the ooh and aah factor comes from the mighty tech; Gears of War 3 is as much of an advertisement for the enduring power of the Unreal Engine as anything else. When the characters talk of an explosion big enough to blow up a fleet of airships, the underlying technology is actually powerful enough to render an explosion big enough to knock a fleet of airships out of the sky.

In the face of myriad criticisms of the series’ muted colour palette, this is also Epic’s most colourful game to date, peppered with lush greenery, bright lights and luscious blue skies. Even the night-time scenes, of which there are many, are more colourful than prior games, and this aesthetic competence finally allows Epic to realise the ‘destroyed beauty’ it plugged so heavily in the original hype campaign. It is, quite simply, a beautiful game, and Epic should finally be able to shed its brown-tinged reputation.

The technology feeds into the fact Gears of War 3 also feels fantastic to play, with pitch-perfect controls, including the brilliant under-steer of the roadie run, and a satisfying heft to its weaponry. This is also a game that forces better judgement to clash with impulse, conjuring up panic when calm is the answer. In fact, beyond the core skill required to shoot and aim, logic and patience is always the necessary response. It is in this fundamental discrepancy that the gameplay forges its success, with players bunkered down with steely resolve as the chaotic on-screen world crumbles, scorches, and wrenches right in front of them.

Certain facets are analogous to what has come before – the active reload mechanic is unchanged and remains magnificent – but new enemies come in the form of Lambent, bloated and gooey mutations of the original Locust adversaries. They burst out of rippling pods like engorged spots, oozing irradiated mucus and flailing their freakish appendages, changing the combat dynamic slightly by promoting long-range kills as opposed to the vicious satisfaction derived from close-range shotgun blasts and chainsaw executions.

The Lancer, a now-iconic mix of assault rifle and chainsaw, remains your best friend in most situations, with all the other toys from the second game making a return. Amongst a few other weapons, Gears of War 3 débuts the sawn-off shotgun and the Digger, the former happily blasting up to three enemies into chunks at extremely short range, the latter an arc-firing cannon that bores through enemies and burrows underneath the ground.

A casual mode has been introduced to help new players, as have tweaks such as crosshair bloom, but veteran gamers will find the difficulty inert on anything beneath Hardcore. Like Bungie with Halo, Epic insists this is the way the game is meant to be played. When the training wheels come off, and the AI is allowed to be smart enough to try and flank you, Gears of War 3’s tactical combat comes to life.

Gears of War 3 is also built to be played with other people, regardless of mode, and it’s something Epic has implemented so successfully it actually feels like going through the campaign on your lonesome is a clear detriment to the experience. Co-operative play is now supported for four players, and an included Arcade mode takes a leaf out of Halo’s play-book by adding score-tracking and modifiers (I very much recommend the laugh track) to campaign levels.

This is a game designed to be enjoyed and experienced by all gamers, and Epic has outdone itself when it comes to the game’s many multiplayer options. The five-player Horde mode, so frequently copied but never actually beaten, has returned, re-branded as Horde 2.0, now allowing players to fend off 50 waves of assorted enemies with the added attraction of building and maintaining fortifications, and the extra stress of fighting off a powerful boss monster with every tenth wave.

A game of Horde can easily spiral into hours, so Epic has added Beast as a complimentary mode, a shorter (think 30-40 minutes) game that switches the players’ role and has them reduce humanity to gibs as the Locust masses over the course of 12 rounds.

Finally there is five-versus-five adversarial play – the home for the hardcore – spread out over six Versus modes and ten maps. Make no mistake: Gears of War is easily the most demanding multiplayer game of our times, and not since Counter-Strike have I ever felt so woefully inadequate when matched up against long-time players.

Yet Epic deserves special recognition for its commitment to multiplayer (Gears of War 3 now runs on a solid backbone of dedicated servers, hopefully alleviating the third game from the matchmaking issues which blighted the second) and clear desire to open up Versus play to everyone, tailoring the sawn-off shotgun to new players and including a new Casual lobby that denies entrance to experts. Even so, Gears of War is simply a much more challenging game than its contemporaries – you need to invest a lot of time and dedication to ever stand a chance.

Still, the real strength of Gears’ Versus mode is its uniqueness, and your commitment will be rewarded by one of the most tense and satisfying multiplayer experiences money can buy. And while getting blasted into paste by the sawn-off will prove frustrating from time to time, it’s exactly the addition Gears of War needs to attract newcomers.

Veterans, on the other hand, will find themselves rewarded with the game’s tempting breadcrumb trail of unlocks – new characters, medals, ribbons, weapon skins and weapon-specific executions – which even includes items specific to legacy players alongside space for further inclusions via premium DLC. The game also builds an event calendar right into the game, advertising current and upcoming promotions and handing out enough incentive for players to check back over the coming months.

Few games offer up as much as Gears of War 3, and even fewer manage to do it this successfully. This is quite easily the best Gears of War yet, weaving excellent core mechanics together with the renewed perception of an ever-maturing developer. Once again, Epic has successfully iterated on a series that most other developers are still desperately trying to imitate.

Few games offer up as much as Gears of War 3, and even fewer manage to do it this successfully.
9 Solid campaign Incredible amount of modes and maps Excellent mechanics Cole Train