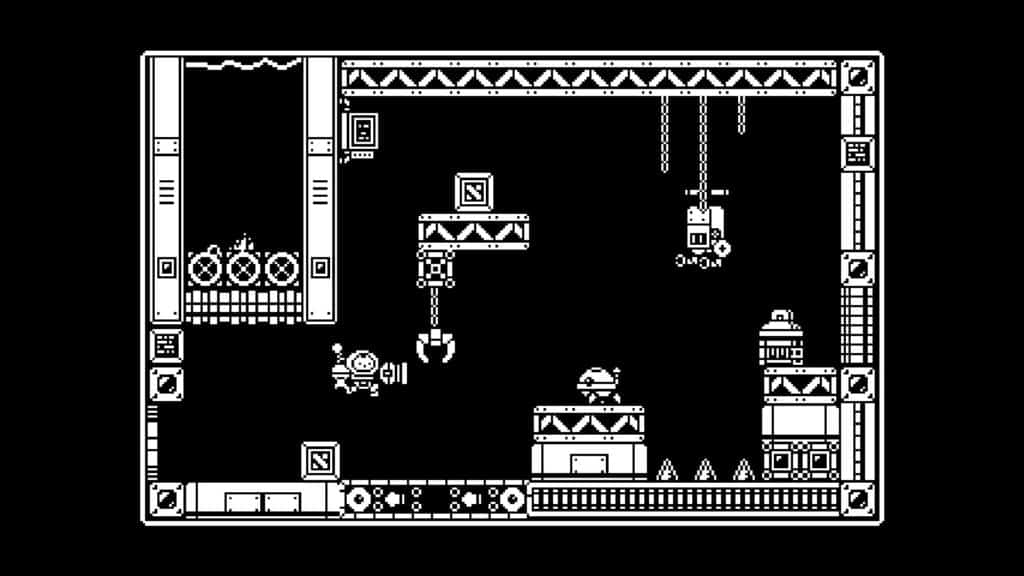 One shot from an aggressive armadillo or a determined pufferfish and the four-legged Kiki is a goner. This pussy doesn’t care, though; aside from the occasional wry smile or furrowed brow, Kiki’s as unflappable as a ‘90s action hero, when they’ve got the added protection of a kick-ass mech suit that can shoot projectiles at airborne irritants and obliterate certain parts of the scenery. It’s the necessary equaliser in Gato Roboto’s 2D, monochromatic, nasty-filled underworld. Someone has to protect Gary, and if it’s you – his pet cat – so be it.

After crash landing his spaceship near an abandoned research facility and then finding himself trapped in the wreckage, bum-chinned pilot Gary must call upon his kitty to investigate a suspicious signal coming from somewhere on the planet. Through garbled N64 voices and on-screen text, the blonde-haired spaceman guides you over radio, whilst also acting as Gato Roboto’s voice of reason. Gary regularly questions whether Kiki’s meowing means they understand the objective: it’s cutesy, but it works. Apart from killing the baddies and nabbing the upgrades, there isn’t much to wrap your head around, anyway.

About 10 minutes in, once you enhance your suit for the first time, you understand that the weapons at your disposal also act as keys to previously unavailable areas of the map. The rocket launcher, as well as being more powerful than your standard shooter, is able to break up certain walls blocking your path; while the spin jump lets you bounce on enemy heads, and reach those high platforms that you couldn’t before. It is effective, yes, but the sheen from those items behind the once locked doors dulls pretty quickly. Extra health points are handy, and modification cartridges can turn up the rate-of-fire in your standard gun, but I was hoping for more. I wanted to be rewarded with something special for going the extra mile, like a unique attachment, and that rarely happened. I did end up with almost impenetrable armour, I guess. Apart from when I came up against that bastard rodent. 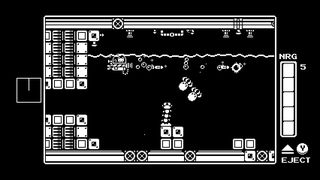 Typical enemies don’t pose that much of a threat. Every now and again you’ll be caught out by a fish with a propeller for a tail, but most of the underground creatures are cannon fodder. Gato Roboto excels, and challenges you, in its boss fights, though. Elaborate contraptions, usually manned moused by a… eh… talking mouse, regularly pop up along the path, and they’re always an utter delight. Weaving through a hail of explosives and missiles, trying to spot your moment to strike, is exhilarating. One encounter reminded of my battle with Dr. Robotnik in Sonic 2’s Oil Ocean Zone: the game had me leaping from two available platforms above a pit of lava, whilst the big-eared fella looked to ignite me with his flamethrower. It’s forever exciting seeing the inventiveness developer Doinksoft brings with each new boss you face.

On the surface, there’s nothing distinctive about any of the main areas; all of them are full of black and white boxes, pipes, and baddies. Even though they’re devoid of any major aesthetic changes, each section plays slightly differently to the last. The Aqueducts are flooded, so you’ll have to sometimes leave your mech behind and hop into a tiny little submarine; the Heater Core’s high temperature means you can’t get out of your suit; and the Vents are so narrow that you must do all your exploring on four legs instead of two. Again, this creativity is wonderful. Gato Roboto asks you to switch things up, and change your approach in each area, with some focussing on platforming and others focussing on combat. The alteration in style always comes at just the right time, too.

When training a pet, you’re told to reward them for good behaviour: if they sit down, give them a treat; if they roll over, rub their belly. That elation after finally thwarting the killer rat is reward itself, yeah, but the extra goodies aren’t nearly as satisfying. A suped-up suit’s additional firepower is great, but I want more reason to double back than increased health. The effort outweighs the award. Still, those times where I absolutely smashed that cocky, squeaky prick will live long in the memory.

While the rewards in hidden areas aren't as satisfying as you might expect from a game like this, Gato Roboto's tense, creative boss battles with a talking rodent are an absolute delight.
6 Boss fights are wonderful challenges The slight variation in how different areas play Doubling back isn't sufficiently rewarded 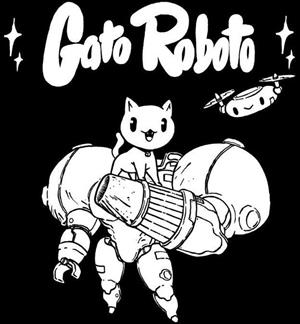