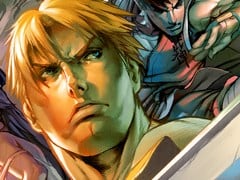 Final Fight: Double Impact’s release on XBLA and PSN this week is well timed. As hype for Super Street Fighter IV reaches fever pitch, interest in the classic two-player co-op side-scrolling beat-em-up has never been higher. Super’s packed with Final Fight fan service. It’s got two characters from Final Fight: Cody and Guy (whose target combo is an exact replica of his main combo from Final Fight), and a Metro City stage. That arena, set among the steel beams of a half-built skyscraper, even has a giant statue of Mayor Mike Haggar holding the city’s name aloft in the background. This is most definitely awesome.

The two franchises have always shared a special bond. Indeed Final Fight was originally intended as a sequel to the first Street Fighter (thankfully someone realised the two games were nothing like each other and decided against it). It’s clear to see just how influential Final Fight was on Street Fighter II. Soviet wrestler Zangief is a clear evolution of Final Fight’s professional wrestler turned politician Haggar: he’s got grapple moves, a piledriver (although it doesn’t spin) and even a Spinning Lariat.

So it feels odd to come back to Final Fight after playing a new Street Fighter game. Odd, but still hugely exciting. Final Fight, after all, is considered by many to be the greatest beat-em-up of all time.

But, if I’m being honest, I didn’t expect it to stand the test of time. I knew it would be hard (it’s a Capcom game), and I knew it would look great in a 16-bit retro way, but I wasn’t convinced about the gameplay. Having played it to death, I am delighted to report that those concerns have been well and truly piledrivered into oblivion.

It really is quite astonishing just how well Final Fight plays. It only uses two buttons: jump and attack, but wrings so much out of them that you wonder whether Street Fighter is needlessly bloated. Say you’re using Haggar. Move him next to an enemy and he will grab them. From there, you can jump and press the attack button for a piledriver, or you could go for a few headbutts, then hold down on the directional pad and finish with a backdrop. Another example: all that’s required to do Guy’s combo is to mash the attack button, but if you hold down, he’ll throw his enemy over his shoulder, knocking down anyone foolish enough to creep up behind him. The fighting system’s got an impressive amount of depth, and, ergo, takes some genuine skill to master it. And, crucially, all three playable characters feel different: Haggar with his stamina and strength, Guy with his speed, and Cody with his quickfire stabs. Final Fight plays like a dream, one with pixel perfect collision detection.

And Capcom’s good work on the port does the ever young gameplay proud. The commitment to “retro” is impressive: this is a port of the original arcade release, not the SNES port. So transvestites Poison and Roxy make the cut, as do all the original colour palettes, stages, bosses, blood, and the “Oh! My god!!!”, rather than the “Oh! My car!!!” voice over from the cars mashing bonus stage. The menu screen is a crumbling room with an arcade machine set against a brick wall, complete with dust and grime and “Have you seen Jessica?” missing persons poster. You can play in the “Arcade Monitor” view, which makes it look like the game is running on an old-school arcade monitor, with phosphor glow and scanlines, and you can even play in the original’s aspect ratio via the “Cabinet Mode”, which simulates playing on a CRT monitor mounted on an arcade machine. This view, described as “the connoisseur’s choice”, displays mankey control instructions on the left and right of the screen. In short, Double Impact is a port designed to wash over the player like a tidal wave of nostalgia.

And the force with which it does so is quite remarkable. The wonderfully designed enemies, the eye-catching, colourful backgrounds and the bone crunching attacks rekindled memories in me I thought were locked away forever. The fight against the samurai sword-wielding Sodom at the end of the Subway stage perhaps gave me the most pleasure. As one of my all time favourite video game characters, it was a thrill to fight the huge mentalist once again. Then of course there are the names of all the Mad Gear goons and their references to the pop culture of the time: Slash, arms dealer Damnd, corrupt cop Edi E., the stabby Holly Wood, and of course Wong Who.

Even better though was seeing the original incarnations of so many characters that would later turn up in Street Fighter games. I’ve already mentioned Sodom, but what about Rolento, and of course Andore, who would later become Hugo and make an appearance in Street Fighter III? If you’re a lover of all things Capcom, really, Final Fight is an essential purchase.

If Capcom had simply left the port there, I’d probably have enough wanking material to justify the 800 Microsoft Points (£6.80) on XBLA and (roughly) £7.99 on PSN download price tag. But Capcom hasn’t left the port there. It’s only gone and included a raft of graphical upgrades and remixed music, which, by the way, is head-rockingly ace.

Best of all though is online co-op. This is the killer, the feature that propels Double Impact from an eight to a nine out of ten. Final Fight is twice as good played with a mate, and mates aren’t always sitting next to you on your couch, so online co-op is a welcome addition. It does exactly what it says on the tin: drop in and out online co-op for all you fancy online-enabled console users out there. And, of course, where there’s online co-op, there are online leaderboards.

Have I mentioned that Double Impact also comes with a port of Magic Sword, the little-known side-scrolling fantasy shooter/platformer originally released in Japanese arcades in 1990? If I haven’t it’s because I know absolutely nothing about it, save for you play a hero who must climb a spiralling tower and it’s completely mental. I feel slightly sorry for Magic Sword, to be honest. Overshadowed…

The only issue I have with the game is that there’s no way to turn off the unlimited lives. Final Fight is hard. So hard, in fact, that it often borders on the unfair. The original’s punishing difficulty was deliberate, of course, inflated to make sure chumps like you and I pumped all our pocket money into arcade machines as we toiled in a never-ending loop of hope and despair. Back in the day, you were terrified of losing a life. Twenty years later, with unlimited lives… not so much.

At least there are loads of sub achievements, supplementing the main achievements/trophies, to be had. Some of these are proper challenging, particularly the time trial-based ones. But you want to complete them, because they unlock original concept art and comic strips in the Vault. Again, retro fan service in the extreme.

All in all, I can’t recommend Final Fight enough. It’s the perfect port of a retro classic; the original game buckles under the pressure of the fan service that’s been added to it. But it’s also got online co-op, making it a hugely enjoyable beat-em-up even by modern day standards. In short: if you’re a Capcom fan, insta-buy. If you’re a lover of old-school fun and fancy a trip down arcade lane, also insta-buy.

Final Fight: Double Impact is the perfect port of a retro classic; the original game buckles under the pressure of the fan service that's been added to it. If you're a Capcom fan, insta-buy.
9 Hugely enjoyable old-school action Kick-ass music Great retro graphics Can't turn off unlimited lives

Final Fight and Magic Sword packaged together in one download.

Final Fight and Magic Sword packaged together in one download.