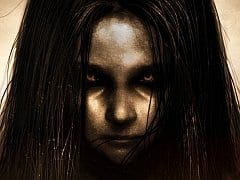 Don’t fancy reading the review? Would you prefer to sit back in your chair and watch some glorious 720p HD footage of the game in action while listening to us tell you about F.E.A.R. 2: Project Origin? If so head over to our video review for a condensed review of Monolith’s first-person shooter.

If I ever meet the person who first realised that slow-motion made things more fun, I’ll give them a big pat on the back. While its use in F.E.A.R. 2 isn’t revolutionary in any way, it is superbly executed and manages to make Monolith’s FPS stand out from the majority of other shooters on the market. In a month, perhaps even a year, dominated by one gorgeous looking FPS, it’s quite telling that it’s F.E.A.R. 2 which provided me with more entertainment.

F.E.A.R. 2’s had a somewhat interesting development cycle. Monolith, developer of the original F.E.A.R. (not the two expansions), was acquired by Warner towards the end of development of the original game, so dropped publisher Vivendi to become part of Warner’s growing stable of studios. Monolith retained rights to the series’ characters, but Vivendi owned the name, so work began on Project Origin, a sequel to F.E.A.R. in all but name. Some time later Vivendi merged with Activision and this allowed Warner to pick up the rights to the F.E.A.R. name, giving us the sequel everyone wanted.

F.E.A.R. 2 picks up 30 minutes before the end of the original game (which ended with a rather large explosion), and doesn’t acknowledge expansions Extraction Point and Perseus Mandate. You play as Michael Becket, a member of Delta Force – an elite unit sent to arrest Genevieve Aristide, president of Armacham, whom Point Man found incriminating evidence against during the first game. Things obviously don’t go quite to plan, and you’re once again thrown into a supernatural horror first-person shooter.

Key to it all is spooky apparition, sometimes girl, sometimes freakish woman, Alma, who is back causing chaos and lots of bloodshed. The story focuses on her incarceration in the Vault, a structure built deep inside the top secret Origin Facility. We won’t spoil what is an entertaining and twisting storyline, but it should come as no surprise that Becket suffers from the same visions as Point Man, so expect, well, just about anything really.

Played entirely from a first-person perspective, even during cutscenes, and with just the right amount of head bob and movement, you feel incredibly grounded and in the shoes of Becket. A few people will likely find the bob slightly hard to take (motion sickness sufferers are probably out of luck), but it’s brilliantly immersive and one of the reasons why the game’s scares work so well.

FEAR 2 is more unnerving and unsettling than it is scary, but don’t take that as a negative. You’re not going to think Alma is hiding under your bed or in your closet, and you won’t need someone to do a clean sweep of the house before entering at night, but while you’re playing your heart rate will rise and you’ll more than likely need to take regular breaks. Chances are your hands will have turned into claws that need prying away from the controller, having been holding on for dear life.

From start to finish F.E.A.R. 2 is a finely tuned experience that builds tension when needed, before releasing it all in a series of stunning fire fights. I’m not a violent person and rarely even swear in real life, but (and I doubt this is good for the whole ‘games don’t make people violent’ debate) F.E.A.R. 2 got under my skin. It totally sucked me in, grabbed my nerves and shredded them. After a few hours I was a blithering wreck, cursing every time something moved across my vision.

As well as the horror is handled here it’s the combat that steals the show, with Monolith giving you the tools to quite spectacularly rip enemies apart. I might be teetering extremely close to hyperbole, but I haven’t played an FPS with weapons as satisfying to shoot as those found here. Combat in FEAR 2 feels meaty and downright brutal, downed enemies slump over whatever breaks their fall and the environments are blown to pieces by a stream of bullets.

Throw in what is still the best use of slow-motion I’ve seen in a video game (it’s hard to pinpoint why it’s so good, but it just feels right) and you’ll find yourself replaying sections for the sheer thrill of it. Whether you’ve got a standard scoped assault rifle, a one-shot kill head-popping sniper rifle, the stupendous Penetrator bolt gun or the flesh frying laser gun, the simple act of shooting is always fun and satisfying. And because of the fear factor, you’ll find yourself pummelling enemies with far more bullets than really necessary, just to make sure they don’t get up again. Did I say that F.E.A.R. 2 will turn you into a nervous wreck?

Monolith’s original entry in the series impressed in part due to its advanced enemy AI, so similar quality in this area in the sequel shouldn’t come as a surprise. Enemies will attempt to take up strong defensive positions in the environment, often tipping over furniture to make better cover, and try to flush you out of hiding with a well placed grenade. There’s great enemy variety too, with the expected soldiers being joined by mutated leaping monstrosities (one of the enemies you’re guaranteed to waste a load of ammo on), cloaked ninjas able to kill you in seconds (think the Predator, just more nimble and therefore more able to freak you out) and full-on mechs trying to send you to an early grave – mechs you get to pilot at numerous points in the campaign.

After you’ve settled into F.E.A.R. 2’s groove (it does feel somewhat different to the majority of shooters out there), you’ll find you won’t want to leave. There’s a certain blood-stained beauty in storming into a room, clocking four armed guys, activating slow mo, lobbing in a grenade, taking out three of them with stunning shots to the head from a close range shotgun, and then watching as the last is obliterated by the explosion. It’s combat that never gets old and is more or less unrivalled. In full flow F.E.A.R. 2 looks and sounds brilliant too, bettering the original in every way, but it is a step below the very best looking games available.

Multiplayer in the original always seemed like a bit of an afterthought, despite Vivendi releasing it for free as a standalone product, and sadly it disappoints in the sequel too. Some effort has definitely been made to give F.E.A.R. 2 fans something to do once the campaign has been clocked, but in a multiplayer competitive environment the combat doesn’t really work. It’s a shame as there are numerous game types on offer, a good selection of maps and some solid net code, but most FPS fans will soon migrate back to the regulars.

If you haven’t already cottoned on to what I’m trying to say; I can’t recommend Monolith’s sequel highly enough. It might not have the jaw-dropping visuals to rival Killzone 2, but it’s a hugely satisfying shooter that’ll have you clinging onto that controller or mouse throughout its tension-filled campaign. If you like your combat meaty and with a solid dose of supernatural scares, there’s every chance this will rank as one of your favourite games of 2009.

F.E.A.R. 2 is a hugely satisfying shooter that'll have you clinging onto that controller or mouse throughout its tension-filled campaign.
9 Slow motion is brilliant Incredibly tense Superb gun play Multiplayer doesn't quite work