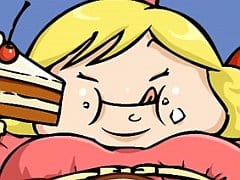 Try to describe Fat Princess to someone who doesn’t play video games every day of their life and you’ll be met with a puzzled, slightly shocked expression. What you’ve just done is detail a game in which you hold a young woman against her will and feed her cake until she’s so morbidly obese she wouldn’t look out of place in her own Channel FIVE documentary. Video games have let you perform illegal acts for years, but for some reason this feels every so slightly more sinister – that is until she starts screaming for more cake and you have your head caved in by a small goblin-like man wearing a pointy hat.

Despite this strange core mechanic, Fat Princess is actually a fairly traditional multiplayer game at heart. Teams of 16 players compete against each other in isometric 3D battles across eight maps, capturing the opposition’s princess, protecting the princess you’ve already captured, killing enemies in team deathmatch or taking control points. So, although the game appears centred on the fat princess, only two of the four game modes actually use that gameplay mechanic.

Each team has a base of operations, complete with five hat machines. It’s the hats that determine which character class you play as: warrior, mage, priest, ranger and worker. These are pretty self explanatory, with the warrior being the best in close-range combat, the ranger able to attack from distance, the priest able to heal team mates, the mage capable of firing off magic attacks and the worker designed to gather vital resources.

Resource gathering initially appears to be a key part of the game, seeing as each hat machine can be upgraded through collected wood and metal to give the classes secondary weapons or abilities – the priest, for example, gains the ability to drain enemy life energy. Each hat machine only offers one upgrade level, though, so it doesn’t take long for both teams to max out and then build any extra upgrades – such as catapults that fire you directly into the enemy base. Games tend to last so long that upgrades are simply something that happens at the beginning, and then lost beneath chaotic battle and bloodshed. You’ll still have to switch to a worker in order to repair destroyed structures, but it’s a pretty thankless task.

As an idea the way you feed the princess in order to fatten her up, therefore making her heavier and more awkward to carry (resulting in more enemies being needed to move her), is a good one. It might be capture the flag with a slight twist, but it’s a novel idea that’s backed up by some wonderful cartoony visuals and whimsical audio – the cry of “feed me” from a rather rotund princess never ceases to be amusing. The problem is that these princess game types tend to last forever. The tug of war going on between the two teams seems so balanced that you can play a single game for an hour and still have no result.

While all online games tend to take a while to settle down, with players initially getting to grips with the nuances of each class, we’ve played multiplayer games every day since launch and the situation hasn’t improved. In the control and deathmatch game types the goal is easily reached by one team, but trying to successfully capture the enemy’s princess enough times to win a match is a recipe for frustration. We’ve seen reports online of players leaving their character in the game, doing something else for up to an hour, then returning to find the game still going on – and it’s entirely believable.

Key to any success in Fat Princess is cooperation with team mates. Charge into battle without a priest or two to back you up and you won’t last more than a few sword slashes before collapsing in a pool of cartoon blood. The same is true of trying to carry a princess. Try to do this on your own and you’ll get no more than a few feet before eating dirt, but do so with the back-up of half your team and things are a lot easier – although still not guaranteed. Doing this is easier said than done though, as everyone is currently more focused on working for themselves instead of for the greater good.

If you don’t plan to play online we really can’t see any point in buying the game in the first place, but there are options to play solo. A token campaign mode with a story is included, but it’s more or less just the multiplayer experience dressed up with some loosely related storyline about cake. Outside of that there’s a game creation mode with support for up to 31 AI bots, with various tweakable options such as difficulty and map. It’s good to have the option to play against bots, but once you’ve learnt the basics it’s unlikely you’ll want to play offline games again.

All of this is ultimately a huge shame as the game is fun to play up until you fail to get a result after investing a huge amount of time in a match. Multiplayer gaming is generally something that you can hop in and out of, playing a few games here and there, but that’s generally not possible with Fat Princess – log on for 30 minutes and you’ll likely fail to even complete a single game. There’s only so much the cute presentation can gloss over, meaning some serious changes will need to be made if the game is going to have any real legs.

There's only so much cute presentation can gloss over, meaning some serious changes will need to be made if Fat Princess is going to grow in popularity as a multiplayer game.
6 Amusing audio Looks great Games seem to last forever Not a huge amount of depth