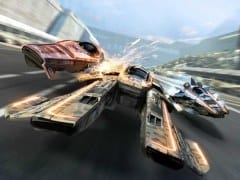 FAST Racing Neo isn’t exactly F-Zero, but it’s so close that for about £10 a lot of Nintendo fans will feel like they’re getting an absolute bargain. What we have here is pure arcade futuristic racing, with ships that hover just above the track surfaces, incredible speeds, and plenty (16) windy courses of varying difficulty. After a few minutes with FAST you’ll probably ask yourself why Nintendo has sat on F-Zero like a hamster that’s forgotten its cheeks are full of goodness, before getting on with and enjoying what Shin’en has created.

There’s no hiding from the fact that at this price point the package feels a bit ‘cheap’: not in a nasty way, but there’s very little gloss. From the menus through to the game modes, think N64 era and you’ll be more or less there. In classic Nintendo racer style you can take part in a series of Grand Prix, each home to four courses: finish the set with a points tally in the top three and you’ll unlock the next event. Beyond this you can replay it all in harder and faster leagues, compete for fastest times in Time Trial, Hero Mode (super fast, with your boost meter also serving as a shield meter), and play local (4-player) or online multiplayer (8-player).

Without modern hooks to keep you engaged, XP systems, loot, or a ‘campaign’, the racing has to speak for itself and it does. Hurtling through twisty corridors while trying to keep the racing line inside a hovering craft isn’t easy. You’ll either be in something slow enough to give you a moment’s thought but lack the straight line speed, or a ship so fast and heavy that only an expert adept with drifting will have any luck whatsoever.

Boost, an integral part of the experience, comes from two sources: via a meter filled by collecting energy balls that are dotted around the track, or immediately when you drive over a boost surface. A twist here is that these elongated boost pads come in orange and blue varieties, and you need to change your vehicle’s phase to match (press a button to switch between blue and orange) or else you’ll slow down instead of reaching warp speed. Certain tracks play with this mechanic more than others, some throwing in coloured jump pads too, and maximising the boost with careful phase switching is key to getting the fastest times.

A slight letdown is the lack of racers on track. While this isn’t an F-Zero game, it’s so clearly inspired by it that having only 10 competitors in races makes the on-track action seem a little empty. F-Zero X (N64) and F-Zero GX (GameCube) each featured 30 ships on track, which made for more jostling and entertaining battles.

Track designs range from the simplistic to the intricate, featuring sheer drops, wall-less raceways, stomping giant robots, massive leaps and more. The sense of speed is FAST’s key graphical trick, helped along by what is largely a very smooth frame rate. It’s a shame that this appears to have come at a cost to the image quality, with a definite roughness to all the edges that give a distinct not-HD appearance.

FAST Racing Neo is a simple game, its roots clearly planted in a simpler time. It’s good, honest, fast, arcade fun, priced perfectly to match its ambitions. I really rather like it. If you’ve got a futuristic racer itch that Nintendo has completely failed to scratch, this should do very nicely.