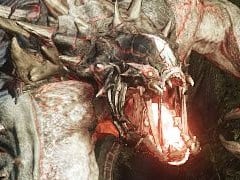 Evolve should have been great. It isn’t. Worse still is that its core idea feels as if it has been undermined by over-complication and, more disappointingly, the worst practices of modern publishing.

Said core concept has an elevator pitch power-suited execs would be proud of: asymmetrical multiplayer where the balance of power rapidly shifts from one team to the other, as four class-based Hunters stalk a progressively more powerful beast over a battlefield that both helps and hinders each side. When it works – and with a good team and a good Monster, it sometimes does – Evolve lives up to the hype. There’s tension throughout, as Hunters race to kill the Monster before it has a chance to hit stages two or three and turn the tables of power. The technological bent of the humans – and their reliance on that tech and using it correctly – clashes nicely with the beast’s raw power. At best, it’s Aliens meets Godzilla.

Evolve’s occasional joys aren’t surprising: it was made by the team that brought us Left 4 Dead, still one of the best multiplayer offerings around. But whereas that game’s relative simplicity eased players in before introducing natural complexity, Evolve is bewildering from the get-go.

Take the unlock system, for instance: each of the game’s four human classes has unique abilities, three of which must be used enough to earn upgrades and unlock the next Hunter. For example, the Medic, Val, must tranquilise the Monster a certain number of times to level up. By earning enough XP for all three facets of your class, you’ll unlock the next character. However, if only two of the three abilities are upgraded, they’ll stop earning XP towards the later tiers until the third ability reaches its first milestone. This needlessly over-complicated grind feels like a thinly-veiled attempt to hide the limited amount of characters in the game.

It also means players may behave in a way that’s a detriment to the team, focusing on one aspect of your skillset when other abilities might be needed. Which, in a game that values teamwork over everything else, is an issue. Want to skip this grind? Pay extra for one of the ‘limited editions’ available at select retailers and you’ll get the first eight Hunters from day one. It feels like additional content, along with in-game design choices, have come at the cost of the original vision, sacrificed to eek more money out of the product.

Locking characters also feels incongruous to the game’s design. Different Hunters are suited to different modes. Take the Trappers, for example, whose skills are crucial for hunting and zoning the beast. Maggie comes with her own Trapjaw, Daisy, who can track down Monsters with her sense of smell. This is very useful in Hunt, the ‘main’ mode, especially if the Monster is clever enough to jump and crawl away from danger, leaving no tracks to follow. In other modes, like Defend (where the monster comes to the player), Daisy isn’t as vital. Being forced to grind to unlock new characters in order to create balanced matches feels like a bizarre decision, as it lessens the fun of early games.

Not that those early matches would be perfect even if this grind was removed. Evolve, like every game, has a learning curve. Here, it’s steep. Irritatingly, it also forces players to sit through extensive tutorials for each character when they first start playing the game, before each match.

This comes at the expense of others, with long load screens before rounds. Rather than have an extended cutscene, we must sit and stare at a static screen while other players are told what to do with their new character. It feels like too many ideas were thrown into Evolve’s melting pot, and the concoction we are handed is too convoluted for players to a) grasp and b) enjoy.

There are 12 maps, but with players being so close to the ground and focused on following tracks, they all tend to blend into one dark and dingy environment. The planet Shear’s colour palette and predominantly jungle terrain means that it can be hard to distinguish locations outside of the central hub (where the generator is hosted, which in Hunt the Monster seeks to destroy once it evolves to stage three). You’ll often be wading through tall bushes, swamps and climbing large boulders, meaning you’ll forget the map that you’re in pretty quickly, with a lack of significant unique locations distinguishing one to the next.

As well as chasing down the main monster, Hunters must also deal with indigenous flora and fauna, both capable of killing you. Deadly plants hidden in the terrain are capable of trapping you and killing you, saved only by an ally’s assistance. All these environmental hazards do is detract from the main aim of the game: hunt and kill the beast.

It feels like the fun has been sucked out of it by over-complication, and bad ideas attempting to grab more money from the original concept. The fun also runs out far too quickly, and the grinding to unlock characters certainly leaves a sour taste in the mouth. A lack of content and disappointing execution means people probably won’t remain in the hunt for too long.

Why Evolve is only as good as the people you play with, and why Turtle Rock doesn’t help

With Evolve’s four-versus-one multiplayer, cooperation is key, but what is equally important is the competence of all five players involved. If all four Hunters work in sync, playing to their individual strengths, and face a formidable Monster, matches can be incredibly intense. The trouble is, these occasions are few and far between.

The best matches I had while playing Evolve were those that went right to the wire. Epic comeback wins where I destroyed a generator with very little health left as the Monster. Or as the last surviving Hunter managed to get the kill. Even when I lost in the dying seconds, it was fun. These were great, because the other four players were similarly matched. But again, if just one Hunter isn’t in tune with the rest of the squad, the game falls apart. Equally, if the Monster is either too good or not good enough, matches can end far too quickly. This isn’t to question the overall quality of players, of course, but how they are matched with others is vital.

In single-player, AI is mostly competent, but naturally bots lack the foresight of preparing for an attack, and follow the one human player too rigidly. You might want the assault characters to run head first into battle while you, as the Medic or Support, leap for the high ground to provide help from afar, but the bots will be right alongside you, leaving all hunters vulnerable to an ambush.

AI also doesn’t use the waypointing system, where clicking the right stick highlights points of interest in the terrain, telling players where to head next, and in-game dialogue is incredibly insufficient for effective guidance. With the AI, you’ll be leading the pack, and there’ll be times when you’ll turn around hoping to see three allies, only for them to be hundreds of metres back, getting destroyed by the Monster, and you’ll be none the wiser.

How much fun you have with Evolve will most certainly depend on the company you keep during your time with the game. AI can last long enough to help you get to grips with the basics, but once you notice their limitations you’ll spend most of your time online, hoping matchmaking pairs you with similarly-skilled players. In the time I’ve spent with the game, there’s certainly been some great moments, but they are sparse among the tedium of chasing shadows in Hunt, or winning matches at a canter with a strong team or against isolated Hunters.

Evolve convolutes its simple idea with too many mechanics, dulling what should have been a great experience.
6 Matches can be fun. Progression mechanic adds unnecessary grind. Long load screens. Strange design choices.