Enslaved: Odyssey to the West Review 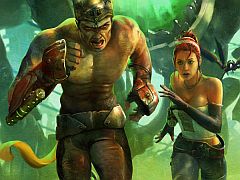 Movies and games are increasingly crossing paths. We’ve had games that have big Hollywood involvement before, of course, but Enslaved feels like it has tapped into the movie biz’s talent pool at every opportunity. It has a story co-written by Alex Garland, the man who wrote The Beach and went on to pen numerous screenplays for Danny Boyle; it also stars and is directed by Andy Serkis, the British actor who brought Gollum to life in The Lord of the Rings.

It feels like story and storytelling were at the forefront of development, and as such the game never falls into the usual trap of unnaturally-extended dialogue and unbelievable characters. While the world of Enslaved is set in the future, complete with technology straight out of a sci-fi movie, nothing feels out of place, with everything fitting into the universe that has been created. Perhaps the strength of the story shouldn’t have come as much of a surprise, given that it’s loosely based on classic Chinese novel Journey to the West – which went on to be the basis for cult 70s TV show Monkey.

New York has been destroyed, with slavers rounding people up through the use of mechs. Enslaved begins with Monkey, a larger-than-life shirtless man with hands bigger than your face, escaping from his cell onboard a crashing slaver ship. As he runs through the increasingly perilous exploding innards of the craft he comes across Trip, a 19-year-old girl also trying to get off the doomed vessel. Monkey manages to cling onto the escape pod she’s entered and the pair jettison off, landing some distance from the crashed ship.

The landing wasn’t smooth for Monkey, seeing as he was on the outside of the pod, so he’s left unconscious. When he awakes he finds that Trip has placed a slave headset on him, meaning he has to do what she says or feel pain – and worse still, if she dies, he dies. It’s fair to say that the two don’t get on, but Monkey has to go along with Trip’s plan to get to her family’s village. He is essentially her protector, and there’s a lot of protecting to be done due to the number of mechs roaming the land.

Thankfully Monkey is more than equipped to deal with anything that stands in his way, with a staff that can be used as a melee weapon, a plasma-firing gun and a shield. Combat is certainly stylish, with Monkey aggressively taking mechs apart with a flurry of swinging attacks. Melee is handled with two buttons, allowing for light and heavy strikes; by holding the former you can also perform a stun move. Monkey can also block and counter, roll to evade enemy strikes and perform multi-hit focus attacks.

Initially the use of the staff as a projectile weapon feels a bit laboured, with Monkey unable to carry much ammo and the firing rate being quite slow, but before too long you’ve bought numerous upgrades that improve things immensely. Towards the end of the game combat is shared equally between melee and ranged attacks, and the mixture of ammo types (stun and blast) makes for engaging gameplay.

Problems are never too far away, though. For one, the camera is a real pain at times, with your view obscured by foreground objects or getting unhelpfully close to the action. Your combat options also feel quite slight, as Monkey’s arsenal of attacks doesn’t expand enough throughout the campaign. The upgrade tree opens up a few new moves, improves Monkey’s shield and increases his health, but compared to other games in the genre the combat is a touch lightweight.

Fights against the mechs start to become quite repetitive at about the half-way point, and there’s not enough unit variety to make these encounters feel exciting throughout. There are plenty of boss fights to livening things up, with these giant mechanical beasts not only looking great but also serving as a much needed break from mindlessly smacking humanoid robots in the chops.

Trip and Monkey are required to work together at numerous points, with a radial menu allowing you to make her perform certain actions. For example, she can be told to distract enemies, allowing Monkey to scamper to cover, or she can operate terminals to help solve puzzles. Speaking of puzzles, most of them don’t take many brain cells to solve, being obvious to all but the most novice of gamers. Generally Monkey will have to use his nimble platforming skills to reach somewhere Trip can’t access, then issue orders before helping her across a large gap. It’s simple stuff, but it does reinforce the growing relationship between the pair.

While combat in Enslaved is enjoyable, if a bit simplistic and flawed, the development of the lead characters is handled superbly. Things get even better when Pigsy is introduced about two thirds into the adventure. As his name suggests, this character resembles an animal of a porcine nature. Pigsy’s history with Trip means he’s somewhat jealous of Monkey’s ever-improving relationship with her, which leads to plenty of brilliant banter and genuine laugh out loud moments.

The way the three characters bond as the game reaches its climax makes for a superb ending. Enslaved’s cast is incredibly small, but this gives each character a real role to play and plenty of screen time. The sense of camaraderie as the closing credits approach has rarely been achieved in video games, while the intriguing storyline is wrapped up in a way that surprises without feeling completely stupid.

Built on Epic’s Unreal Engine 3, Enslaved delivers some stunning environments that stretch into the distance, beautiful character models and gorgeously detailed massive robots. This does come at the cost of a smooth frame rate, though, with the more impressive areas forcing the game to chug quite noticeably. There’s also a slight awkwardness to the animations, especially when the characters transition from one to another. Facial animation can’t be faulted though, and the accompanying voice work is absolutely top class. Monkey, Trip and Pigsy are amongst the best characters created for a video game.

With Enslaved Ninja Theory has created an excellent new IP in an era when sequels dominate the gaming landscape. It’s a game with its fair share of problems (notably a less than perfect camera and a fairly basic combat system), but the strength of the story means you’re unlikely to feel disappointed. There are certainly better hack ‘n’ slash games on the market, built around deeper combat, but few games can match Enslaved’s excellent fusion of gameplay and storytelling.

There are certainly better hack 'n' slash games on the market, built around deeper combat, but few games can match Enslaved's excellent fusion of gameplay and storytelling.
8 Believable characters Brilliant voice acting Excellent story Combat isn't as deep as others in the genre