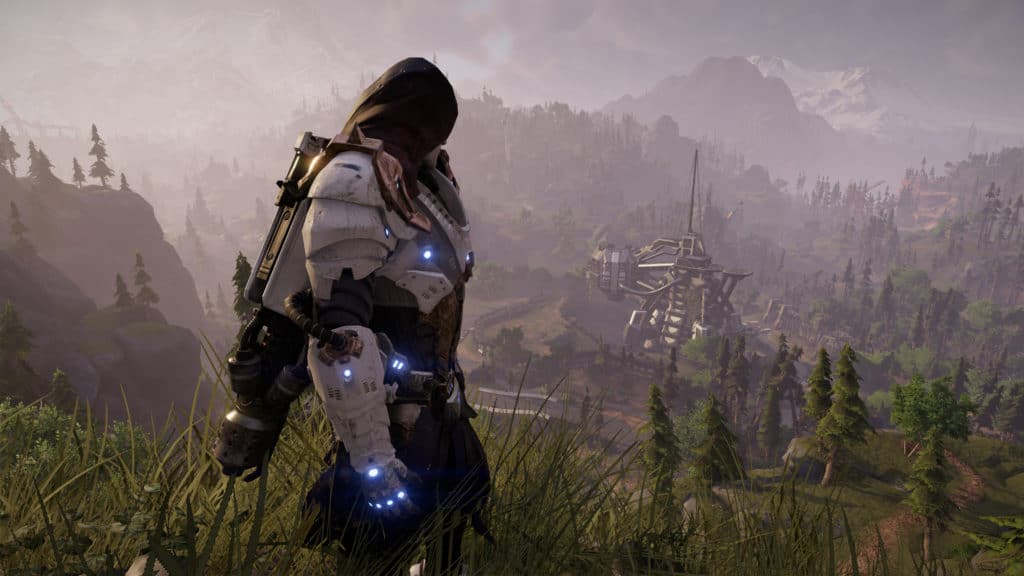 So far, ELEX is an extremely mixed bag, both in the sense of its content and its quality. I’m told, by the marketing and by characters in the game, that the world was destroyed by a meteor carrying the titular mineral, and that different factions have rebuilt it again in different ways. Clerics use technology while Bandits are more Mad Max types; there are frozen tundras and volcanic wastelands.

At least, I have to assume that’s the case. I don’t know for sure myself because I haven’t yet made it to any of them. I’m still in the starting area, a traditional post-collapse fantasy affair with much lush foliage, glowing plants, and monsters ranging from velociraptors to what I can only describe as a really overcooked turkey. This is the region controlled by the Barbarians, who are basically if the Nords of Skyrim became self-appointed gardeners for the entire world. They have huge axes and hate technology to the point of outlawing it and throwing it all into a pit. They sleep in nice little houses without window panes, and grow huge magic seeds that convert ELEX into magic and allow plants to grow again. Many of their plants suffer from mysterious pop-in as you’re running around.

I quite like the Barbarians, because they’ve developed a good aesthetic for themselves, and the tech vs. magic theme makes me think of Arcanum, an amazing RPG from the early 00s. The Barbarians are also the faction that allow you to unlock magical abilities, so I was pretty up for joining them, but they’ve set out a lot of hoops for me to jump through before I’m allowed, and I’m pretty sure some of them are currently impossible. This is the first reason I’m still in the starting area of the game: I’m hanging around trying to complete Barbarian fetch quests until they like me enough that I can join up and get magic powers.

The second reason is that ELEX is a very large, very complex game. Your character used to be an Alb, a faction who deliberately jack themselves up on ELEX, becoming more powerful but losing their humanity in the process. When your ship crashes the chemical leaves your system and you’re conveniently pushed back to scrub status by the withdrawal, having to relearn things like ‘fighting’ and ‘human emotions’. There’s a lot of detail to all the levelling and menu systems, as well as the quests you can take on. Some beardy guy tells you to go and check on an outpost, and you turn up and the outpost lads are starving. These lads have a nice hodgepodge of regional accents, and are variously acted as if the game was super serious or as if it were Two Worlds II all over again. So you agree to get them some food, because they clearly aren’t going to make it alone.

Now, you can either buy or forage for the stuff they want, or you can persuade a shopkeeper to let you have a heap of mouldy bread. The second option is cheaper and quicker, but might have unintended consequences. Your responses to questions can also change your emotional traits. It means that it can take a while to do things, but I enjoy this kind of detail.

Points in your classic RPG categories like social or survival skills are earned by purchasing skills in one of those areas, but you can only purchase said skills if your ability scores (your strength, intelligence, stamina and etc.) are high enough. The same applies to using weapons. You might need your strength to be at least 25 before you can use a different sword. Min-maxing your scores, i.e. dumping all your ability points into a few traits, rather than creating a well rounded character, is encouraged by this system.

And here we come to the third reason I haven’t made it out of the starting area. I typically player softer, magic and/or persuasion types in RPGs, so that’s where I dumped my stats. Except I don’t get the ability to use magic until the Barbarians let me join them. And they won’t let me join them until I complete a bunch of quests. And these quests often involve either hitting things or exploring the world, full of things that want to hit me. And because I didn’t stat dump into things like strength, I can’t wear decent armour and I can’t hit things well. The world is dark and full of burnt turkeys. Load times are long. I have made very little progress.

I will update you when, or if, I get to the next region.

ELEX is a mixed bag so far, and that 'so far' refers to the starting area. The game density plus a min-max stats system means I haven't got further yet.
- Cool detail in quests and the game world Nice RPG environment Combat and leveling works against the player