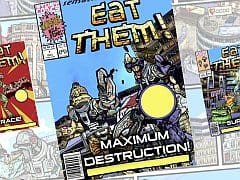 Eat who? Them. Oh right, fair enough. The Bristolians of FluffyLogic, the little dev team who last year brought you the tower defence-based Savage Moon, have a basic set of instructions laid out for their new PSN title, and that’s basically an “eat first, shoot lasers later” code of conduct. Eat Them! left its heart in 1950s schlock-horror films, which gives it a similar appeal to the mayhem of arcade classic Rampage. You control a genetically engineered monster dropped into a dense urban area, complete with an ungodly yearning to raze buildings, pull scenery from the ground and eat anything that runs away from you. Pint-sized military men will hold up an intersection in a futile attempt to take you down with their arsenal of weapons and city-dwellers will run at the sight of you, leaving you to either fight back or gobble them up for health.

This makes the game kitsch in the best possible way. And, with kitsch as its source of inspiration, the graphics and art design follow suit with silver age comic books being the visual conceit. The menu system is built around pictures of comic books that can be opened to access the campaign, game modes and unlockable maps. The introductory sequence – the one that explains the origins of the monsters – is interspersed with the standard comic book signifier: 2D story panels that define the scene. And that style goes on to touch the character and environment designs too, with a brilliant cartoonishness only possible from cel shading.

Gameplay imitates art here, because essentially what you do is bombastically tear up the city like in any good comic panel. Everything is destructible. Jump to the top of a building and its roof will collapse – keep jumping and it will eventually get crushed to the foundations. Tear out office walls with a monster swipe, or pick up a bus along the road to throw at the droves of military who inevitable spring up after a minute or two.

The game mode Bite the Power challenges you to damage as much of the city as possible in a three-minute time limit without dying. An easy prospect in theory, but one that’s actually surprisingly difficult when most of the city’s law enforcement is on your tail. The remedy to being shot repeatedly is to scoop up anyone nearby and guzzle them down for health, which turns every mode into a balance between destruction, feeding frenzy and bullet-avoiding. Other modes like Stayin’ Alive simply ask you to not die for four minutes, which speaks to the relative difficulty.

There’s an issue of repetition. The Longest Yard has you racing between checkpoints within the city; similarly, Logistics Nightmare essentially asks you to destroy the marked objects at the end. Industrial Strength and Military Industrial Complex are working with identical objectives – destroy a lot of the city within a time limit. The lack of creativity in the game modes means you’ll likely lose interest in the objectives the game offers, which after some time becomes an issue – but to counter that the game lets you follow your own personal goals to create new custom-built monsters with different combat abilities. Some shoot lasers, others have enormous mechanical claws and guns-for-hands.

Progress in the game lets you unlock new body parts. You can change your head, left and right arms, torso, backpack and legs – all of which impact the look and combat abilities of your monster. Different damage dealing abilities correlate to different play styles, so missiles can be used from far away and chain-fists on the other hand can be used for close combat.

Eat Them! taps in to what makes mindless destruction addictively fun. It has the kind of spirit that’s usually reserved for the days when you burned plastic toy soldiers with a magnifying glass in the sun or stomped down on your Lego house while pretending to be a giant: simple ideas that are at the root of the games we make up as kids. A brilliant little title, all it needs is a bit more variation.