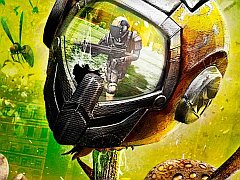 It’s hard to pinpoint, to convey in words, exactly what makes Earth Defense Force a good game when it screams of inadequacy. The graphics are rudimentary, the fonts are horrendous and the script is laughable, but despite all of this, or perhaps even because of it, it remains great fun. Like its 2007 predecessor, Insect Armageddon taps into a very pure vein of gaming. Forget fancy facial mo-cap, karma systems and clever plot twists: in EDF, you shoot overgrown bugs with increasingly powerful weapons.

Story, then: alien insects are invading Earth, and it’s up to you to kill ’em. Bam. Job done. While there’s nothing in the way of cutscenes, a vague sense of narrative is conveyed in the form of your operation handler, who will ply you with destinations and objectives over the comms system. The campaign is mostly a case of traipsing from waypoint to waypoint, slaughtering any insects that happen to stand in your way. Occasionally you might activate a transponder or jump in a helicopter for a Time Crisis-esque flight section, but very little interrupts this simple formula.

As you fight the good fight, your squad-mates will rattle off so-bad-they’re-actually-good insults and celebrations, carried off with cheesy American voice acting. It gets away with it because it knows it’s bad. Its tongue is enough in cheek to be genuinely funny – an incredibly hard type of humour to nail. The resulting B-Movie vibe is what defines the experience, reflecting the nature of the gameplay itself.

The insects are relentless in their attack, pouring out of anthills and drop-ships in their thousands. At first it’s just ants, but soon spiders, wasps, and praying mantises join the fray, as well as monstrous bipedal robots and laser-wielding UFOs. Elite enemies, which can be seen from miles away, stomping through the city of New Detroit like Godzilla, require slightly more thought than your average bug. Glowing red hotspots on their bodies represent weak-spots, which need to be pounded with horrendous amounts of firepower before the nasties will hit the deck. Tanks and mech-suits can make these altercations slightly easier, whilst offering a welcome change in pace.

Even with 25, 30 insects on-screen at once, crawling over buildings and spewing their vile bug juices all over the shop, the frame-rate remains respectable. There’s the occasional technical mishap, especially when you start unlocking more explosive weaponry, but it’s nothing compared to the slowdown that plagued the first EDF. It’s still a basic looking game, with basic looking models and basic looking textures, but it’s a considerable improvement over the original.

Unlike its predecessor, there are four character classes to choose from. Or, to be more precise, there are four suits of armour to wear – you’ll always play as the same gruff-voiced squad commander, Lightning Alpha. Trooper armour is the all-rounder, reasonably quick with moderate defence. Tactical armour has the advantage of being able to deploy turrets, mines, and radar dishes, while Battle armour offers unparalleled protection at the expense of speed.

Jet Armour is the most interesting of the bunch (as well as the coolest to look at). As well as being the fastest of the four suits, it offers the ability of flight. This is particularly handy during more frantic battles, allowing you to put some much needed distance between you and the swarm of bugs below.

Each suit can be upgraded, although working through all eight ranks requires a significant investment of time. Insect Armageddon boasts over 300 weapons – almost double what was on offer in the original – which are tied into a tier system. This means that certain weapons – even if you’ve already collected them from the corpses of fallen enemies – can’t be equipped until you’re of an appropriate rank. The best weapons, the tier-eight badboys capable of levelling entire city blocks with a single squeeze of the trigger, won’t be unlocked until much later in the game.

Completing the campaign on normal, which takes around seven hours, will only take a suit to rank four or so, and subsequently only fourth tier weapons are available. To unlock the beefier guns you’ll need to play through the game again on Hard. Here, insects are not only more numerous, but considerably tougher, too. Inferno mode is a step up even from that, reserved for the EDF ‘elite’ only. This is where the real challenge lies.

Doing this all on your tod is difficult, to say the least. While your AI teammates do a reasonable job of reviving you should you fall, things are much easier with real EDF troops at your side. The campaign supports three players online, as well as split-screen play. Insect Armageddon is a game that becomes exponentially more enjoyable with a chum or two. Outside of the campaign, there’s also Survival mode, which strips the game back to basics: surviving wave after wave of enemies. Here, up to six players can take part – and all six will be needed if you hope to get the achievement for surviving 100 waves…

It can feel like a mighty slog at times, mindlessly shooting ant after ant after spider after ant, but there’s a strangely rhythmic quality to it. I found myself frequently zoning out, only to be roused by the level complete or mission failure screens. The latter will haul you out of a daze pretty gosh-darn quickly, inspiring fierce bursts of swearing and anger: Insect Armageddon has no checkpoints. To complete a level, you’ll have to complete it all in one go. A mission can take anything up to half an hour, and dying right at the end (which I’ve done several times) is no fun at all, let me tell you.

Let’s bear in mind though, Insect Armageddon is a budget release; you’ll be able to pick it up for a paltry £24.99 at launch. Whilst this is a reflection of the production values, there’s a lot of game on offer here. Slaughtering enough insects to satisfy the tall orders of the Achievement and Trophy list will take a long time indeed. This isn’t a game that demands your undivided attention, though; it can be played sporadically, either on your own or with a few friends and some beers. It can become monotonous – mindless even, if you let it – but with the right frame of mind, there’s a remarkable amount of fun to be had here.

EDF can become monotonous – mindless even, if you let it – but with the right frame of mind, there's a remarkable amount of fun to be had here.
7 Great fun with a friend A lot of game for your money No checkpoints Can be very monotonous