Games today are pretty complicated beasts. The first person genre has been overtaken by a not unwelcome mix of diverse offerings:the narrative of Half Life, the squad-based anti-terrorism thrills of Rainbow Six, the customisation and RPG elements of games like Deus Ex, the myriad of online-based games ranging from Quake 3 to Battlefield 1942 and an invasion of smart enemies, be they merciless alien invaders (Halo) or island-dwelling mercenaries (Far Cry). Doom 3 is going back to basics; all-out, balls to the wall blasting with just a little bit of fear in the mix. Doom 3 lacks a lot of what so called ‘modern’ games have, but don’t be fooled, simple doesn’t have to equal out-dated.

Doom 3 is as traditional as id Software games come – for a start, it’s devoid of any real enemy intelligence. Despite claims to the contrary, there’s little to no evidence of intelligence in Doom 3 (in more ways than one, but more about that later). Enemies will dodge slow-moving fire at times and, occasionally, take cover behind a crate, but 9 times out of 10 they will simply charge you down, striking out with melee attacks and making no real effort to remain in one piece, or try to out-smart you. They aren’t there to baffle you with their intelligence. They move, you shoot them, simple as that. This is an un-dead army not a tactical S.W.A.T team. Traditional in the sense that it features big, brawny bosses; they’ve got big guns, big health bars and in return the player has to slay them with even bigger weapons. Traditional in the sense that it features ages-old guns that get bigger and noisier the further into the game you get; health and armour pickups; special abilities and standard level progression.

The game’s opening lifts undeniably from Half Life; a sombre prelude to the coming accident, which the player is ready for, but, as might be expected, no one else is – and is genuinely engaging, pulling the player deep into the setting of the game and encompassing them in a thick layer of atmosphere. Scientists and security mill around the wonderfully industrial Mars City base which appears alive with activity. Indeed, when things kick off the tension and atmosphere are multiplied by a factor of one hundred, as hell is unleashed and incessant, panicked radio chatter fills your ears from your fellow marines (who, incidentally, seem incapable of defending themselves in the same way you can, with your lowly pistol).

The first half an hour of play sets the mood very well – excitement levels are raised as everything goes to hell (literally) around you and your former co-workers spring back into life, intent on killing you; moody lighting warps into brooding darkness and the player will be expected to explore through pitch darkness with nothing but a torch which can only be wielded by holstering his gun. Enemies spring unsuspectingly from every direction, further heightening your suspense and anticipation.

There is little variety in the gameplay but what did you expect from a remake of Doom? While Half Life had the player fighting, it also wanted them to do a spot of puzzle solving and to navigate the environment. Doom 3 doesn’t care so much about the other stuff – the vast majority of your time will be spent simply blasting things back to Hades. There will be some moments where you are presented with a minor non-combat related challenge, but to call them challenging would be generous. Most of the time, when you’re not shooting things, you’re picking up the PDA’s belonging the staff of the facility, studying them for details of their previous owners and their fates, retrieving codes for ammo lockers or updating your security clearance so you can progress through that locked door (in other words, the coloured key cards from the original Doom). These can be entertaining asides from the real meat of the game (and can at times be quite haunting) and go a long way to creating the games incredible atmosphere, but for some they might sit at an incongruous angle to the rest of the game; slow in pace, compared to the adrenaline that constitutes 90% of proceedings. The plot too proves to be engaging enough, when it decides to stick around for a while, although is unlikely to convince cynics.

Fortunately for Doom 3 then, the combat can be totally engrossing. It can, however, at times, also be hugely frustrating, particularly when you are surrounded by enemies who can savage you in seconds, or when fighting some of the game’s boss creatures, and the weapons on offer aren’t the sleekest looking of their respective types ever seen. Despite this though, blowing things up has never felt so good in a first person shooter and through sheer virtue of addictive combat, Doom 3 proves itself to be one of the most addictive shooters in recent history. The game features a plethora of familiar looking armaments, ranging from the good old shotgun and machine gun to more powerful offerings such as the plasma rifle and rocket launcher (and not forgetting the often satisfying chainsaw). It also gives the player access to power-ups, such as the berserk, which turns the player into a raging hulk of flailing fists. In the modern realm of games, where the emphasis is on being something closer to human, it’s nice to be an unstoppable killing machine again. This is after all a game.

To truly feel how nerve racking the game can be you’d be best to avoid excessive use of the quick save function. Enemies teleport in front and behind unexpectedly, appear from hidden compartments and generally go out of their way to freak you out. Saving every few seconds makes the game a lot easier, but removes a huge chunk of fear from the game.

Sound is used to very great effect, whether it be the foreboding humming of the base, beastly grunts and screams or the ethereal threats of Dr Betruger. Set pieces, too, prove to break up the corridor blasting and door-unlocking by offering the player other tasks to take care of. There are a number of excellently devised sections where the player has to follow a small amount of light through a completely dark area of the base and the tension during these sections prove to be some of the highlight moments of the game. A few more moments like this would have helped remove a little of the tedium that sets in the further you get into the game; blasting hell beasts back home is a lot if fun, but a few more changes in pace would have been nice.

Little hasn’t been said about Doom 3’s visuals. The engine has been the talk of Internet forums for the last few years and it is easy to see why. While clearly not reaching levels of a modern CGI movie, Doom 3 has set the benchmark for PC titles. Darkness and light are exploited well; mainly in terms of scaring the player, even if it can’t be used to invoke stealth (although for some this may come as good news). Physics and rag doll effects are present and correct; exploding barrels may not quite reflect real world barrel behaviour, but who doesn’t like them? The bump mapping effects make the whole work look splendid, even if you don’t get to see any real variety in the locations – the Martian surface, the human base and Hell itself all look wonderfully convincing and atmospheric, with whirls of dust and sulphur almost chokingly real. While a top-end system isn’t required to play the game, the visuals play a big part in the gaming experience. Lighting in particular isn’t as effective when the game is played on ageing hardware.

The multiplayer, while not bad, is a pretty simple experience. Stock 4-player modes such as deathmatch and team deathmatch are supported but prove to be as pedestrian as fans may expect, given the current climate of online shooters. Some interesting aspects include maps which allow the player to manipulate the light to their advantage, but there really is little else of note in this department, which is as much as id promised. Doom 3 was designed as a single player experience, but with the right maps multiplayer could be fun.

The fact of the matter is that there are going to be many people disappointed with this game. Anyone expecting a game that will reinvent the genre will have missed the point of the game. Sure, it doesn’t advance the first person shooter genre at all, but that doesn’t really matter when the games basic mechanics are as excellently executed as this. If id had taken a similar approach to how other developers are telling stories in their games we may have had a more cinematic game, but would that have really been Doom? The game is testament to John Carmack’s skill as a hands-on developer, and provides a gaming experience not found very often in today’s games. Simplicity can sometimes be a good thing.

Doom 3 provides a gaming experience not found very often in today's games. Simplicity can sometimes be a good thing.
7 Great use of light A technical marvel Lack of variety in setting lack of variety in gameplay 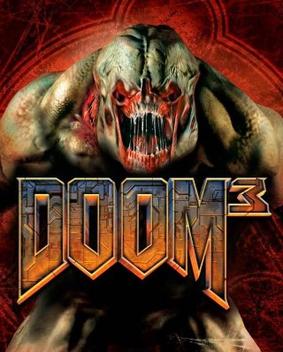 Doom is back, this time with a mind blowing new graphics engine.

Doom is back, this time with a mind blowing new graphics engine.