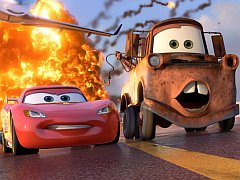 Cars 2 no doubt had an easier time making its way over to video game land than the majority of movie licences, but given how poor the majority of such games are it definitely wasn’t a given that a racing game based on the Pixar movie would be good. Thankfully Cars 2 the video game is from the same stable as the excellent Toy Story 3 game from last year. While not nearly as ambitious as Woody and co’s adventure, Cars 2 provides fun arcade-style racing action for all the family.

Tying in with the plot of the new movie, Cars 2 features the fun characters fans will know and love (Lightning McQueen, Mater and the rest) but with a secret agent twist, with our heroes going up against the evil Professor Z. Think of Cars meets any James Bond movie and you’ll be close to what’s on offer here. The end result is an arcade racer that feels like a more explosive version of Mario Kart. You can powerslide around corners and use speed boosts, but also fire off numerous guns, perform tricks in the air, drive backwards and even lean onto just two wheels.

After a few training missions set inside virtual race courses you’re thrown into the game proper, which consists of a mixture of straight up multiple lap events, battle events in which weapons can be used, arena-like challenges in which you have to take out as many enemy cars as possible and a number of other variations on these.

On the track gameplay definitely falls into Mario Kart territory. While each of the included cars has a different balance between speed and power, they all powerslide when you hold down the drift button, can jump, perform tricks and earn nitrous while doing so. A special boost, which also serves as a shield that turns your vehicle into a battering ram, can be activated when your nitrous bar is completely full, and comes in handy when trying to catch up on the last lap.

As with many racers of this type there are certain weapons that feel unfair, usually targeting the leading car and in turn letting everyone else catch up. Early on this doesn’t really matter as the events are incredibly easy to win, but once you’re past the half-way point frustration rears its head now and again. There’s really very little enjoyment to be gained from having a string of weapon attacks hit you one after the other, causing you to drop from first to outside the top three when the finish line is almost in sight.

Race events can cause a few swear words youngsters playing Cars 2 probably shouldn’t even know about, but the Survival and Hunter events can be plain dull. Survival gives you a shield and an ever-depleting energy meter. Collect energy pick-ups to replenish the bar, but if it runs out it’s game over. Hunter asks you to shoot enemy cars in fairly open levels using the various weapon pick-ups scattered about. Survival can be mildly exciting as you attempt to gain a few precious extra metres before your shield runs out of juice, but Hunter is tedious in the extreme.

Being a fun arcade racer the included four-player split-screen works extremely well and is something of a rarity on the Xbox 360 and PS3. As is the case in the classic Mario Kart games, you’re able to take part in standard weaponised races or opt for battle arenas if you want to focus purely on the combat side of things. Sadly there’s no online play included, so local split-screen is the only way to get your multiplayer Cars 2 fix.

Outside of the main mission mode and freeplay there’s really little else included in the package. Unlocked cars can be viewed in a virtual garage and there’s a way to link up your game to The World of Cars Online website (giving you a reward for doing so), but that’s about it.

Toy Story 3 looked great, aping the movie brilliantly. Cars 2 isn’t quite as close to the movie it’s referencing, but on PS3 and 360 the visuals are still pretty impressive. Tracks aren’t the most detailed and on the whole the package is a step down from the beauty seen in Disney’s ill-fated Split Second, but some neat motion blur and bright, bold colours give things a modern feel. Whenever Professor Z appears on his helicopter the low polygon model and basic texture work look particularly ugly and out of place, but on the whole Cars 2 is a nice looking game.

If you want a genuinely ambitious video game based on a movie license, check out Toy Story 3. If, however, you or a family member really loves Lightning McQueen and the movie’s cast of characters, this simple but fun arcade racer won’t disappoint.

If you or a family member really loves Lightning McQueen and the movie's cast of characters, this simple but fun arcade racer won't disappoint.
7 Explosive weapons Smart visuals Simple gameplay Combat-focused challenges can be tedious