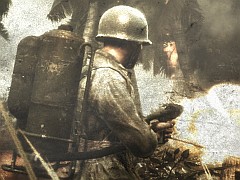 Gamers aren’t a very open minded bunch it seems. From the moment Activision announced that Treyarch, the development studio behind Call of Duty 3, was working on Call of Duty: World at War the game couldn’t get a break. Whatever the press saw and reported on in a positive light was spun so much it seemed as though the game was going to fail no matter what. Gamers had spoken (at least those that post on internet forums) and they wanted Infinity Ward or nothing. Thankfully Treyarch clearly felt it had something to prove, with CoD: World at War managing to escape from CoD4’s shadow and dazzle us with the most action packed and intense WWII shooter to date.

The move back to WWII after the stunning CoD4: Modern Combat disappointed a lot of fans. Many thought the series was taking a step backwards, and you might think you’ve had enough of the World War II genre, but give it a chance to show you what it’s got and World at War will convince you otherwise. With two concurrent campaigns (one with you fighting for the Russians against the Nazis and another with you as a US soldier fighting against the Japanese) as action packed as this you’ll barely have time to blink, let alone breathe. Over the course of a non-stop six-hour game (longer if you play on one of the harder difficulty settings) you’ll trawl through swamps, struggle to stay alive during a night-time beach-side attack, burn the enemy in huge open fields, gun down attack boats while high above the ocean in the gunner seat of a plane, crawl through a burning building, and pick off enemies one by one in a dimly lit railway station.

Early critics of World at War labelled it CoD4 with a WWII skin, and in truth that’s not far wrong, but it shouldn’t be seen as a negative. If you’ve played CoD4, or any CoD made for current platforms for that matter, you’ll know what to expect. In the console games you’ve got a handy auto-aim when looking down your sight, grenades are mapped to the shoulder buttons, you can pick up and return grenades thrown at you, your health returns over time, enemies frequently re-spawn until you reach a certain point in a level (yes, this still happens), there are the token vehicle levels and there’s a seemingly endless number of amazing set pieces. People, understandably, have different opinions on Call of Duty’s incredibly linear, heavily scripted gameplay, but when it’s in a package this slick it’s hard not to enjoy the ride.

Although similar to other WWII games you’ll have played, World at War includes a number of ideas that make this a different experience. The first is the Japanese soldiers and their unique fighting style. When playing as the US you’ll come across Japanese soldiers hiding in trees and in long grass, camouflaged or in small hiding holes, or charging straight at you with a bayonet aimed right at your gut. To counter this you get to use the game’s second great new feature: the flame thrower. This has to rank as one of the best weapons we’ve used in an FPS and is easily the most satisfying to use in World at War. The way it flows out of the gun and spreads across grass and through bunkers is a real sight to behold, and almost worth the asking price alone.

It would be easy to give CoD4 creator Infinity Ward all the credit, seeing as it made the engine, perfected the gameplay and essentially made the template for Treyarch to follow, but Treyarch still had to build a fun and exciting game that had some ideas of its own – the fact that Activision could have slapped Infinity Ward on the opening splash screen and no one would have battered an eyelid speaks volumes for the work that’s been done here. Yes, it’s more of the same, but it’s still one of the most thrilling first-person shooters ever released and would have been worthy of the name Call of Duty 5, had it been called that.

Having not played CoD4’s single-player campaign since we were done with it towards the end of last year, it’s easy to forget just how great it looked, and still looks – even compared to this year’s top titles. The fact that Treyarch has managed to create a game that easily looks on par with CoD4 and on occasion exceeds it is a brilliant achievement. The amount of effects in each scene (this engine still produces some of the best smoke effects around) and the sheer number of things going on really needs to be seen to be believed at times. The aforementioned flame thrower looks incredible, and the ignited buildings and grass look pretty great too. Like with recent Xbox 360 exclusive Gears of War 2, we found ourselves looking around at the hugely detailed environments instead of moving through the game – something that’s pretty dangerous considering how nifty enemies are with rifles.

Treyarch’s audio department deserves some credit too, for what is at times a rousing musical score that fits the relentless action to a tee. A lot has been made about the A-list Hollywood voice acting, in the shape of Kiefer Sutherland and Gary Oldman, and they perform exceedingly well. We’re not entirely sure Oldman was needed to voice a Russian (if you didn’t know you’d have no idea it was him), but it’s nice to have him in all the same.

For the first time in the Call of Duty series you’re able to play cooperatively with up to three other players, either online or via system link – or with just a single friend via split-screen. Rather than up the difficulty through rather cheap means (improved enemy accuracy or less health for your character) you’ll face more enemies as the players in your group increases. This makes for some of the most spectacular and thrilling fire-fights we’ve seen, and yet somehow manages to make a few of the more frustrating parts easier. With four players you can manage battles, with someone focussing on the enemies manning the more devastating weapons, while the rest mop up the enemies causing trouble in the foreground. Add in a scoring system that introduces a competitive element to co-op play (and goes towards your overall multiplayer XP) and you’ve got a game that is easily on par with the best co-op games on the market – the unlockable death cards that modify the experience and the secret Nazi Zombies mode are the icing on the cake.

Co-op is just one aspect to World at War’s multiplayer offering, with a full competitive mode hoping to pick up where CoD4 left off. To say multiplayer in World at War feels similar to CoD4 is perhaps the understatement of the year. We reckon it’s a tad slower paced and of course the weapons are different, but you’ve got what is essentially the same system as in Infinity Ward’s game, perks and challenges included. The one big difference is the inclusion of vehicles in multiplayer matches. We’re not sold on this, with the core CoD gameplay in our opinion not really suiting the mega power that a tank brings to the table. Still, it’s there if you want it. Whether or not you’ll enjoy World at War’s multiplayer isn’t something we can say for sure. If you’ve grown accustomed to CoD4’s modern arsenal World at War may come as a culture shock, but if you’ve been waiting for the next great online WWII shooter, this is it.

The weight of expectation on Treyarch’s shoulders must have been immense. Having seen CoD4 release to near unanimous praise and incredible sales, there must have been a few worried people inside the studio. The WWII shooter suddenly became incredibly dated, yet Treyarch was a year into development. Whether the sheer number of doubters spurred the team on or the extra development time just allowed them to make the game they were truly capable of doesn’t matter. What matters is that Call of Duty World at War is a stunning game that doesn’t miss a beat from start to finish and includes one of the most feature packed multiplayer components of any game released this year.

Call of Duty World at War is a stunning game that doesn't miss a beat from start to finish and includes one of the most feature packed multiplayer components of any game released this year.
9 Non-stop action Stunning presentation Feature rich online modes Going back to WWII will be tricky for some