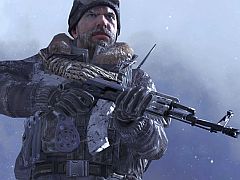 I felt like I needed a rest after I finished the single-player campaign in Modern Warfare 2. Such was the onslaught of in-your-face gameplay, explosive set-pieces and “OMG” plot twists that I was mentally exhausted. It was hard to process what I’d just played through. The campaign more or less follows the formula set out by Infinity Ward in its previous two games (CoD2 and CoD4), but it’s one hell of a ride. Hopefully I’ll recover soon, as I’ve got months of multiplayer and Spec Ops to play.

Modern Warfare 2 will receive criticism for all of the things I said above. At times the campaign is so intense, so intent on throwing things at you, that it’s hard to take it all in. The plot will leave some wondering what’s going on as it switches from soldier to soldier, moving all over the world and beyond through the course of a six-hour experience. Some of the story will have players wondering if certain scenes were necessary and if certain moments really make sense in the grand scheme of the story that spans CoD4 and Modern Warfare 2. You’ll also still find yourself battling against wave after wave of enemies, and some gamers will no doubt feel that this scripted gameplay is a bit old-fashioned now.

These things aren’t going to convince CoD haters that this is the kind of game they want to be playing, but if you’ve been taken in by this formula in the past, Modern Warfare 2’s campaign delivers the goods and then some. Even talking about one brilliant moment will potentially spoil one of the best parts of the experience, so let’s just say that you should expect plenty of variety in gameplay, mission types and environments. There’s absolutely a feeling that this is a direct follow-on from CoD4, but that’s no bad thing when that is quite rightly regarded by many as one of the best shooters of all time.

Six hours (add a few more if you play on one of the harder difficulty settings) might not sound like long enough for the campaign in the biggest game of the year, but it’s unlikely you’ll feel short changed. There’s really very little in the way of filler, with Infinity Ward putting together a superbly paced experience that stumbles so irregularly that the one sticky point I encountered, towards the end of the game, came rather out of the blue. A siege on a large house sees you pinned down as you fend off what seems like hundreds of enemy soldiers, and this is the only point in the entire game that I felt things weren’t bang on in terms of difficulty.

Anyone who’s played a CoD will be familiar with the basic controls. On consoles the left trigger will aim down your gun’s sight, snapping your aim to the closest enemy – something PC gamers with their mice needn’t worry about. The shoulder buttons throw out grenades, eliminating the need to manually switch to them from an inventory, while the d-pad activates special weapons or night vision goggles (when available). Thrown grenades show up on the screen as easy-to-identify icons, and you can chuck them back if you’re quick enough. Finally your knife or other melee weapon can be instantly used at the click of the right stick.

Infinity Ward has introduced a few fresh ideas, including a handful of great new weapons and pick-ups (the riot shield comes in very handy at times), but it hasn’t fiddled too much with what works. The biggest new addition to the game isn’t actually in the campaign at all: Spec Ops is a brand new single-player or two-player cooperative mode that presents you with more than 20 short missions, each with set objectives that need to be accomplished as fast as possible. Many of these take place in environments lifted from the campaign, but when played with the right person (and thankfully there’s two-player split-screen in the console games as well as online), these can be even more fun.

Cooperative play was previously absent from the Modern Warfare experience, quite notably so since other genre heavyweights have implemented it so well, but Spec Ops should satisfy your co-op hunger. The missions on offer have been designed expertly with co-op in mind throughout, making them far more enjoyable than a bolted-on campaign mode would have been. You really need to work with your partner to achieve success, and when you do the sense of achievement is incredible. It’s probably easiest to describe these levels as more elaborate scenarios that follow the same instant action formula as the bonus plane mission unlocked at the end of CoD4, although many of those included here last upwards of 20 minutes. Even if you only get six hours from the main campaign, you’ll get that and more from Spec Ops.

No, it’s not as visually cutting-edge as Uncharted 2 or Killzone 2, but that doesn’t mean it’s not a fine looking game. Other than some frame rate hiccups here and there (slightly worse in the PS3 version, sadly) the frame rate is silky smooth, there’s always an absolute ton of stuff going on all around you (take a moment to look into the sky and you can see how much work has gone into creating this virtual world) and the audio work is exceptional. The Hans Zimmer (The Dark Knight, among others) score is incredible, matching every heart-stopping moment the campaign throws at you, and the voice acting for the main characters is top drawer, putting many other triple-A releases to shame.

So, that’s a rip-roaring, no-holds-barred, action-packed single-player campaign and a staggeringly good co-op mode, and I’ve yet to mention the competitive multiplayer. It’s this that is likely to be played for months and months, keeping Modern Warfare 2 in your disc drive well into 2010. Up to 18 players can take part in numerous solo and team matches set across 16 brand new maps. You also get the same levelling up and perks system as seen in CoD4 and Cod: WaW, meaning that the more time you pump into it the greater your selection of perks will be.

Perks are nothing new these days, but they’re still a great inclusion and let you customise your style of play to a greater degree than what your weapon load-out alone would allow. You have three perk slots to fill, each offering you a choice of unlocked abilities or bonuses. As well as plenty of the perks seen in CoD4 (Slight of Hand, Stopping Power, Steady Aim), there are new choices such as Ninja (invisible to heartbeat sensor) and Hardline (killstreaks require one less kill). These can be improved by the new Pro perks, unlocked by completing time-intensive objectives during play, giving you enhanced abilities.

Kill Streaks – the system that rewards you with mid-match bonuses for racking up a certain number of kills in a row – are present and correct, and there are a handful of new rewards on offer if you’re good enough (access to the Predator missile system and an air-dropped care package, being two of them). Terrible gamers needn’t get too despondent, as Infinity Ward has added a new Deathstreak mechanic that assists players who die frequently. Martyrdom, the infamous perk that saw your character releasing a grenade upon death, is now one of these, as is Copycat, which gives you the kit of the guy who killed you – great if you’re still wandering around as a noob with the starter load-out.

Modern Warfare 2 also features unlockable attachments, such as laser sights for your weapons, and lots of new firearms to get your hands on; this is just as well, as the starting kit isn’t anything to write home about. Also back are multiplayer challenges: weapon-specific goals that award more XP to go towards your overall rank. These range from the relatively simple (10 headshots) to the downright tricky (40 bullet penetration kills – achieved by firing through walls). All of this stuff sets Modern Warfare 2 apart from its competitors, making for one hell of an addictive multiplayer experience.

In truth, CoD4’s multiplayer mode didn’t quite get the credit it deserved back in 2007, with no-one really knowing how well it would be taken up by the millions of people who bought it. Today it’s obvious that gamers will be playing Modern Warfare 2’s multiplayer for a very long time. In fact, it’s hard to see the majority of people wanting to play any other multiplayer shooter until the next CoD is released, such is the quality of what’s on offer here. That seems like as good a place as any to end this review: Call of Duty: Modern Warfare 2 takes everything that was great about CoD4 and ramps it up to the next level. With the best multiplayer shooting that money can buy, an incredibly action-packed campaign and plenty of superb two-player co-op levels, this is without a doubt a real contender for game of the year.

With the best multiplayer shooting that money can buy, an incredibly action-packed campaign and plenty of superb two-player co-op levels, this is without a doubt a real contender for game of the year.
10 Co-op mode is superb Brilliant campaign Multiplayer will eat your time It's essentially more of the same