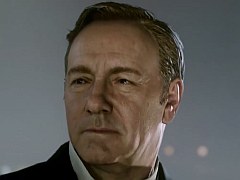 Note: This week Activision held a review event for Call of Duty: Advanced Warfare. VideoGamer.com was not invited to this event. We were told we would receive a copy of the game on Monday, November 3, after the game had been released. Instead we bought the game ourselves and present this review without any form of embargo to adhere to.

An expert distillation of Call of Duty’s core appeals, made fresh again thanks to excellent level design and the inclusion of game-changing exosuits, Advanced Warfare is a return to form for a franchise on the slide. Returning developer Sledgehammer Games has used its elongated development cycle wisely, resulting in the best COD in years. Even the single-player is enjoyable, in its own stupid way. I know.

Said campaign has had a considerable amount of time (and money) poured into it, and images of Kevin Spacey’s grinning mug have dominated the marketing, for obvious reasons. But multiplayer, as always, is the star. The inclusion of jetpacks may have changed the way it plays, but Sledgehammer has also looked back across the whole franchise, identifying the best elements of Call of Duty and marrying them expertly to its own innovations.

Black Ops 2’s Pick 10 system returns, expanded to 13 slots, and scorestreaks have been modified. Gone are the set Strike Chain classes of MW3, Sledgehammer’s previous effort. Instead, rather than just working for rewards within a global playstyle (such as assault or support), players can choose to modify individual streaks into more powerful or diverse variants. This comes at a price, of course: adapting the streak means you have to score more points to get it. So if you want to keep your streak towards, for example, a care package from resetting after death, you can, but you’ll have to score more points to get the package at all. Not all streaks have the same modifiers, and there are quite a few to choose from for each reward. It’s an interesting system, especially for the prolific player.

The biggest change however comes in the form of the exosuits, and their associated powers and perks. It’s easy to scoff at these as a panicked response to Titanfall’s wall-running and jetpack-boosting pilots, and they potentially could have changed the game into a fatally frantic experience. In practice I found that they worked to focus players – to make them aware of their surroundings at all times, and to consider their movements rather than just smashing about the place, especially as boost dodging reveals your location on the mini-map.

It’s a case of risk and reward: do you boost jump to a higher plane for overwatch, knowing that once you get there everyone will know where you are? Do you choose a suit that can make you invisible, or one that can deploy a bulletproof shield or improve movement speed in a crisis? After a few rounds, I was using the suits more defensively than offensively, which seems to be the intention, seeing as boosting while planted on the ground is only possible to either the side or backwards. They’re fun, and great for navigating the world or getting out of a tight spot, but they’re not going to turn you into a cyborg ninja when on the attack.

What makes the exosuits such a joy to use – and indeed makes the whole of multiplayer so satisfying – is the map design, some of which is among the best any Call of Duty has to offer. The finest Advanced Warfare levels, such as Bio Lab, Retreat, Terrace and Defender, are each built to take advantage of your new freedoms. These stages – mid-sized but expansive-feeling, like a lot of the game’s offerings – feature an obvious focal point where firefights are concentrated, but also boast excellent running routes around their exteriors, at different heights and inclines. Levels feel less like racetracks now for players to barrel around on an ‘optimum’ route: Instead, you’re invited to use your initiative – and your suit – to assess and implement the best traversal possible.

At its best, Advanced Warfare naturally groups players together, funneling them into encounters with ease and keeping the firefights rolling across the map. As you’re now vulnerable from multiple approaches there are far fewer instances of lone wolf play. Instead, players – even those with no headsets or obvious vocal teamwork – will start working together organically, moving in pairs or threes and covering each other. (Speaking of teamwork – you can also hop into someone else’s aerial scorestreak as a secondary gunner.) In a lot of ways, counter-intuitively, the game feels slightly slower, not faster, as there’s more to consider.

The real jewel in Advanced Warfare’s crown however is the gunplay. Many of the development teams associated with the franchise have often talked about getting back to the ‘gun-on-gun’ appeal that made the series’ name, moving away from over-the-top rolling killstreaks and other shenanigans to put the focus on your skill with the weapon in your hand. Sledgehammer has absolutely nailed it in this regard.

Previous entries sometimes made it feel like you were firing a potato gun, but here the feedback from firing your weapon – and hitting your opponent – is phenomenally good, helped immensely by the reworked gun audio, which really makes it feel like you’re shooting something other than a Nerf gun. Crucially, time-to-kill ratios seem fair – there are a few instances where you may think you shot someone about 40,000 times before they killed you, but on the whole one-on-one’s are superb. It’s hideously addictive, backed up by lizard-brain satisfying audio cues when you win encounters, and the game’s desire to force you to be good with your primary can easily pull players into flow states.

It’s certainly the best Team Deathmatch Call of Duty game in years, easily besting Ghosts and Black Ops 2. Objective-based modes are also satisfying – old favourites such as Domination and CTF return, but new addition Uplink is also great fun. Essentially basketball, players have to throw the uplink ball into the other team’s node for a point, or ‘dunk’ it for two points. Players can’t fire their weapon while in possession, leading to passing exchanges as the ball gets popped around between covering players, and desperate last-gasp runs at the opposition node.

Sledgehammer has done a sterling job with Advanced Warfare: it’s a game that knows its strengths and has worked hard to eliminate its weaknesses, while at the same time introducing risky new fundamentals. But there are niggles. One is that there are some very obviously overpowered weapons, including your starting assault rifle, which is so effective at both mid-range and spray and pray you may never change it. These are still very early days, of course, but the amount of people I see wielding it and the AK12 is disproportionate. Some scorestreaks are also odd or annoying: one sees you controlling the harnessed power of the sun, another ‘hacks’ your HUD with an obnoxious image that you see every time you respawn.

Inevitably, some maps fall short. Greenband is a dud, a rabbit warren of spawn-death spawn-death, and early favourite Solar (judging by the rotation) is dull, if good for kills. The wave-based co-op mode is also a bit too lightweight to hold attention, consisting of the same kill-regroup-buy dynamic of Zombies but, in the early going at least, without that mode’s obvious hook.

Still, these are small problems in a superb overall package, one that has me interested in Call of Duty again. For a future warfare title with drones and jetpacks, Sledgehammer’s success is partly to be found by looking to the series’ past, and by combining its own ideas with COD’s natural appeal it has reinvigorated the franchise.

How does the campaign hold up?

Thankfully eschewing some (if not all) of the rather more dubious geopolitical elements of Black Ops 2 and Ghosts, Advanced Warfare’s campaign instead focuses on a somewhat-credible threat – and a villain worth chasing. This is the best purely single-player mode the franchise has seen in years. Granted, part of that is due to the last two offerings being terrible, and it’s not on the level of Modern Warfare, or even its sequels, but it’s an 8-hour slice of Bayhem whose silliness entertains for the duration.

Most of its sustained appeal lays with Kevin Spacey’s megalomaniacal CEO Jonathan Irons, head of international PMC Atlas and a man for whom moustache twiddling was probably invented. Spacey chews the scenery with an Underwood-style verve as he plans to establish global military supremacy, without the pesky drawbacks of nation states or diplomacy.

Although the end of the game is thoroughly deranged in its plotting, carrying with it some rather odd ideas (New Baghdad is a gleaming metropolis from where an American tyrant runs the world) it admirably carries a game in a series for which sense was jettisoned a long time ago. The other characters are ciphers to move the cutscenes and international blood-letting along, but Spacey stands out.

Moment to moment gameplay has been tweaked just enough to retain interest. The Crysis-style exosuits – with distinct abilities like wall climbing and slow-motion, and which change automatically depending on your mission – add a touch of flavour to the gunishment, and end of level perks for good play (headshots etc) mix things up a little. It needs it, as the spotty and stagnant AI ensures it’s never been more apparent that the game is a beautiful firing range. That said, using the new toys is a lot of fun: not least the new multi-capability grenades, which encompass EMP blasts and threat indicators that can change encounters dramatically.

It’s a pacey affair, taking in stealth and action-heavy missions but never getting too bogged down in one nation (and there are a few) or altercation. It ensures that AW is an enjoyable ride, even if it’s one that rather obviously repeats some of the series’ previous beats.

The entire last third of the game could have been taken directly from Black Ops 2 (catastrophic drone-based bridge attack, the general layout of the assault on The Big Bad’s stronghold, etc), and it’s curiously short in insane bombast. Neither does it really feel like you’re fighting in a larger war, or are really that involved in the outcome of the overall conflict: great at replicating the PMC soldier’s life, not so great for involving the player in World War, er, 5? Is that what the series is up to now?

That America is once again the victim of a global conspiracy is another letdown, underlining the cultural myopia the series is drifting towards. But at least the villain is an American himself this time, and one worth hunting.

Mixing futuristic tech with established fundamentals, Sledgehammer has created the first truly impressive Call of Duty in years.
8 The exosuits are fun, and reinvigorate a stale franchise. Multiplayer maps are superb. Campaign isn't totally rubbish. Some weapons are overpowered.