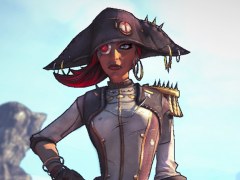 Borderlands 2, eh? That’s probably a game you’re playing. It’s a game everyone’s playing, right? Only, well, I haven’t been playing it as much in the past couple of weeks, and we’ve got Halo, Assassin’s Creed, Need For Speed and Call of Duty all showing up soon. Besides, I’m not sure if I can keep playing because I’ve already finis– oh, Borderlands 2 DLC!

My first thought: Gearbox Software’s latest is not exactly suffering from a paucity of content. When people complain about Borderlands 2 (let’s just go on the belief that some people do this) they are hardly likely to flag up its whopping length as a negative. I’ve been around the game one and a half times and I’m still discovering plenty of stuff, so what I’m getting at is that I don’t really imagine anyone is sitting at their desk thinking “cor, I wish Borderlands 2 was a little thinner”.

This means Borderlands 2 has to work even harder to convince players they should make their copy of the game a little fatter. Good news, then: after playing through Captain Scarlett and her Pirate’s Booty I was left with the kind of great mood the likes of which DLC rarely finds itself able to trigger. This hefty chunk of content adds a few more pounds to the overall Borderlands 2 experience – but it’s a good kind of weight, like healthy muscle mass. For your money you get a main questline that’s as long as most single-player campaigns, dozens of optional side-missions and all manner of looty doohickies, challenges and Vault Symbols. You’ll be packing a lot more firepower when you leave Oasis than when you went in.

But Borderlands 2 is never at its best when reduced down to raw statistics, which is funny for a game powered almost entirely by numbers. Captain Scarlett is, crucially, a whole new experience that tucks nicely into the game’s larger vision while enriching and complementing what comes before and after. The script – so often a lacking part of bolted-on DLC content – is rich and hilarious, introducing some brilliant new characters and throwing you into another manic situation that’s a delight to blast your way out of. Shade, who you meet early on in this massive expansion, has already become one of my favourite characters of the year.

There’s also plenty for you here whether you’re coming in as a newbie Mechromancer or tackling it as a veteran Gunzerker, with the new Oasis area scaling to your current level. There’s just enough of a spin on the regular order of things to pique your interest, and you now drive around in a skiff and shoot familiar enemies sporting a jazzy nautical garb.

You won’t really be doing anything new, then, but Gearbox manages to hide all the traditional genre tropes behind top-tier presentation, a bit like a parent sneaking a child their teatime peas by covering them in mash potatoes. There’s a lot of fetch quests littering up the quest log – a few too many, perhaps – but for the most part these are gladly accepted because of the characters handing them to you and the mottled, barren character of the unfortunately named land of Oasis.

DLC is a funny old business, sold by publishers as a service to flame fan commitment and designed to transform a game from an overnight flash in the pan to an evergreen wonder. For every good (BioShock 2’s Minverva’s Den) there’s a bad (BioShock 2’s Protector Trials ) but Gearbox has shown exactly how DLC is supposed to be done. Captain Scarlett and Her Pirate’s Booty is an affirming example of the right time, the right place and, crucially, the right content.

Gearbox has shown exactly how DLC is supposed to be done. Captain Scarlett and Her Pirate's Booty is an affirming example of the right time, the right place and, crucially, the right content.
8 Great new characters Loads of new content Longer than most single-player campaigns Later quests aren't as good