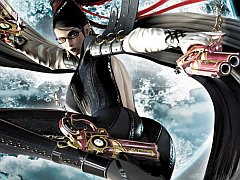 “Seven years ago I created Devil May Cry. Many of you have said that it kick-started the action genre into 3D, but did it really? Have action games really progressed past what we accomplished seven years ago? I don’t believe they have. We as creators have squandered the opportunity to make things better, smoother, more intense, more engaging; that is why I have come back to 3D action. It is time to make good on the promise of seven years ago and I feel that we are the only team who can do it. The era of style and action is over. Today we take action to its climax.”

It was certainly a bold statement to make, but no one ever questioned him. This is a man responsible for creating one of gaming’s biggest franchises and he speaks with an authority that few developers possess. A year and a half later, Kamiya’s latest baby, Bayonetta, has finally made it into my hands, and it really does take action to its climax. Kamiya can talk the talk, and he’s delivered the goods to back it up.

Bayonetta has it all. It’s hardcore in the extreme, with a combat system so advanced the majority of gamers will never experience it to its fullest, yet also flashy enough to appeal to a broader audience; it’s got a style that’s unique while also unquestionably Japanese; it’s completely and utterly bonkers, with a lead character unlike any other I’ve ever played before and a cast of enemies so crazy in their design that it’s hard to imagine how they were dreamt up in the first place; and it’s an insane amount of fun once you know what you’re doing.

I could try and explain the storyline, but most of it is so barmy I felt as if I was just along for the ride, rather than able to take much of it in. You play as Bayonetta, a witch who is suffering from temporary memory loss after a 500-year sleep. As she tries to remember her past she tackles wave after wave of angelic enemies, summons demons to rip the heads off giant snakes, and encounters humans who live in another realm. Oh, and she can fire guns from her hands and feet, her hair forms her clothing and transforms into weapons, she can turn into a panther, lollipops heal her and most of the game is played along to a sound of a remixed version of Fly Me to the Moon.

The cat-suited, dark-haired, spectacled beauty is from the school of female game characters whose bodies defy biology, and she’s not shy about showing it off. During her adventures in the fictional European city of Vigrid, players will be treated to more than a little bit of virtual flesh and plenty of risqué camera angles. Bayonetta is a game that is a bizarre mix of top-drawer combat, punishing difficulty and crazy tongue-in-cheek cutscenes.

It’s the combat that will win most plaudits, such is the quality of what’s on offer here. Your move set revolves around kicking, punching, firing your selected gun and dodging. Combinations of these will perform attack chains, unleashing more advanced attacks, while dodging an enemy’s attack at the last second will temporarily send you into Witch Time, in which Bayonetta moves at normal speed but everything else is slowed down. You’ve got two weapon sets, switchable at the press of a button and customisable from the game’s menu.

There’s a recharging magic meter too, which when full allows you to perform Torture moves of varying degrees of brutality. A guillotine isn’t a friendly way to end an enemy’s life, but the Vise is a real work of brutality. By rotating the left analogue stick Bayonetta turns the crank, ending with the trapped enemy being crushed into a bloody mess. All these torture moves require some form of QTE, usually just repeatedly hammering one button, but they’re brilliantly designed and never cease to be entertaining.

While plenty of moves are available from the start, new combos, attacks and weapons are unlocked and can be bought. Halo-like rings are the game’s currency, dropped by fallen enemies and awarded for performing well in each chapter. Racking up these rings is easier said than done, with the game requiring some nifty skills if you want to earn the biggest bonuses. Achieving the top Platinum medal in a single verse (each chapter consists of numerous scored sections) requires a sustained combo and for Bayonetta to have avoided all enemy attacks. Thankfully for beginners the easier difficulty modes make combos easier to perform, so relative newcomers to the genre needn’t miss out.

It’s a testament to the game’s design that it can be loved equally by hardcore gamers and beginners alike, and in an age when games cost millions of pounds to develop this is more or less essential. Developer Platinum Games has definitely made a game here that will go down in history as one of the most hardcore ever, though, if you choose to play it that way. With online leaderboards for every verse in the game, there is a ton of replay value here too, even after you’ve managed to get platinum statues for each chapter.

All this thrilling gameplay is wrapped up with some stunning presentation. In the Xbox 360 version (the only version I’ve played), the world is always a delight to play in, whether bathed in glorious sunlight or being pelted with heavy rain. Enemies can occupy so much space they can’t be fully seen on your TV, attacks are chained together as fluidly as any hack ‘n’ slash has managed, and it all runs at a lightning fast frame rate. Long-time gamers will even spot the odd homage to some gaming classics, hammering home the feeling that Bayonetta was made by a game design legend primarily for true gamers. Even the loading screen, which presents you with the option to practice your moves, has been designed to keep you playing and improving.

For all its gameplay brilliance, Bayonetta is not perfect. For many the cutscenes (especially those that resemble comic panels) and general almost comedic storytelling will feel at odds with the visceral combat, while the voice acting varies from excellent to downright cheesy. The lollipop concocting screen, where you can create new lollies by mixing collected items, is clunky, the Gates of Hell store requires an obscene amount of rings to buy the best new attacks, and the way one of the main NPCs speaks is so annoying I felt like skipping most of his cutscenes. Small criticisms, but the game just didn’t gel together quite as well as I’d have liked.

Is Bayonetta a big step beyond what we were playing eight years ago? Perhaps not quite the leap forward Kamiya would have us believe, but the sassy witch still represents one of the finest hack ‘n’ slash games I’ve ever played. It’s fast, thrilling, gorgeous, punishing, rewarding and tremendous fun. It’s an old-fashioned game at heart, will test your skills to their limit, and more than lives up to its billing.

It's fast, thrilling, gorgeous, punishing, rewarding and tremendous fun. It's an old-fashioned game at heart, will test your skills to their limit, and more than lives up to its billing.
9 Great sense of style Deep, fluid combat Looks superb Story could have been told better