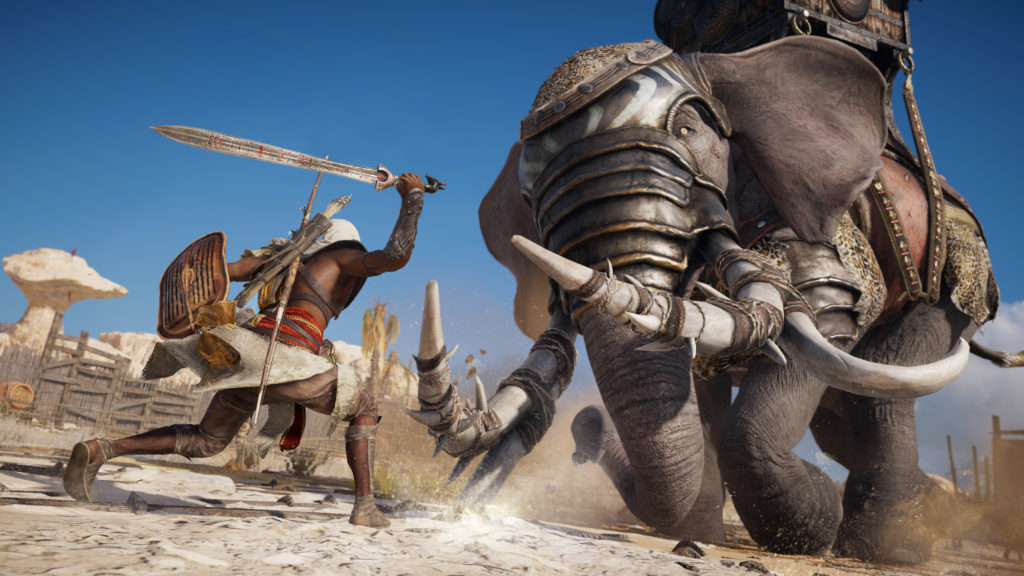 I have now spent many hours in Assassin’s Creed Origins, and I will probably spend many more. Initially I thought the game was too big, the vastness of the map overwhelming because I would never do all of it and see everything, but having finished the main story with a good portion of the world still unexplored, I don’t feel that way. Origins is so big and so permanent a world that you can almost think of it like you do a real life country. I don’t feel bad for not having explored the Green Mountains region, because I don’t feel bad for not having been to the Brecon Beacons: they’ll be there, doing their thing without me, and I can visit if I want to.

The world that Ubisoft has created is stunning. It lives without you. You can sit and watch a village go about its collective business, paying no attention to you whatsoever. Egypt includes a myriad of different locations: the pyramids of Giza (mostly capped in smooth white stone in protagonist Bayek’s time, though already ancient) on the edge of a desert; smaller Egyptian towns like the starting area in Siwa; the great Hellenistic city of Alexandria, library still intact; lush farmland along the Nile delta; scrubby forests; rocky mountains. If you’re exploring desert dunes, Bayek might taste a sandstorm approaching on the wind, and then you turn and see this great wall of dust approaching you, while on the other side you can see, far off, green trees along blue water. At times you have to see through the eyes of Senu, your faithful eagle, just to appreciate the scale.

In the midst of this, the main plot line disappears into the sands a little. The start is a little confused, and the pacing in the middle draws out, ending in a rush of action and grand purpose, suitably epic but crammed into the final hours. There are great moments within it though: fighting an almost invisible enemy in a sandstorm, tracking the flame of her arrows, or figuring out which priest of Anubis to assassinate based on the fact that he has a cough. Bayek himself is an amiable protagonist to spend hours with. He’s sometimes very serious, and is quick to bear the righteous anger of wronged peoples, but most of the time is surprisingly upbeat, and has a dry sense of humour, all of which means he quickly makes friends in every town.

The world goes on outside the Animus, too, linking all the previous games together if you care to look and even, dare I say it, making the Assassin’s Creed film retroactively more interesting than it was when it came out. Origins takes inspiration from other games (you can see flashes of Destiny, The Witcher 3, and Ubisoft’s Far Cry among others) but in breaking new ground for the series it also goes back to its roots. When you kill a target you talk to them upon their death, as you did in the first AC. Origins explains the significance of feathers, and why the assassins cut their ring finger off to use their hidden blade. It’s hard to be a fan of the series and not feel a thrill seeing the Order first being formed.

Despite that, I had more fun with some of the sidequests than forcing Bayek to the grindstone of his main, sad task, reminding him of his recent, personal tragedies. I like to keep him happy, and there’s a lot to divert him too. There’s a lot of the busy work you get in most RPGs these days: fetch three of these things for me, Medjay, which are inexplicably far apart. But elsewhere AC is straining to break loose and do much more interesting things. One of my favourite quests was in finding the remains of a ritual sacrifice on a deserted island. I explored the scene, and ultimately got the objective to keep my eyes peeled for more information around Egypt. I got no map marker, but just had to pay attention. Origins also allows for things to go wrong in entertaining ways, like accidentally setting your own ship on fire as you flee, inadvertently poisoning an entire village by leaving a body in the wrong place, or running into a huge group of hippos when approaching an enemy camp, which is the sort of thing that never happened in AC games before.

There are still map towers, but they only open up fast travel points. You have to find everything else, mostly using Senu to spy things out for you, but though Origins is much less hand holding, I can’t help but wish it had had the courage to let go of my hand all together.  Despite the map being mostly swept clean of icons, I still enjoyed the game more with the HUD pared down to minimal so that I had to engage with the world, tracking bodies by the bloodstains left or navigating using the actual directions NPCs gave me.

This, though, does make combat a lot harder, and it’s harder than it’s been in the rest of the series already. Without the HUD you don’t get markers for the enemies around a camp, so you have to be much more careful. Even with the HUD on, combat feels like an achievement when you do it well. When you’re used to just parrying and instantly killing an enemy, learning to dodge and parry manually is a challenge. You develop your own tactics when you spot different enemies. Take out the archers first at range with the Predator bow. Try to assassinate the heavy shielded soldiers from the bushes. Watch out for the fast ones with double blades and smoke bombs. Use a spear if you’re swarmed by vultures. Avoid hippos entirely because they’re still bastards. This intertwines with the new skill tree and crafting systems. Improving your armour is a must, so you might find yourself hunting crocodiles, but often you’ll pick up what you need naturally as you explore. But if you don’t use your bow much, then you don’t need to improve your quiver, or put your XP points into the Hunter side of the skill tree. You might prefer the Seer side, which lets you use sleep darts and poison, or beef up the Warrior side so you can defend yourself if you get caught.

The extra year has been greatly to Assassin’s Creed’s benefit, as Origins is undoubtedly the best the series has been in some time. It’s ambitious, at times breathtaking, and has given new life to a series that it was becoming faintly embarrassing to like. It feels like Origins has brought us to the edge of real greatness again, and I hope that Assassin’s Creed moves forward by making the leap.

Assassin's Creed Origins has vastly improved combat and an astoundingly beautiful world to explore, but it felt a little afraid of going all in with its new direction.
8 You'll never want to leave Egypt Combat is much better than previous entries There are some great side quests to explore Just take that final leap, Ubi