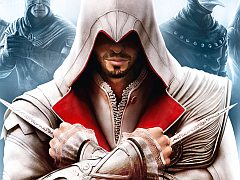 There was a brief period back in 2007 when the marketing of Assassin’s Creed was pretty much being sustained by wheeling producer Jade Raymond onto a stage and having her say something about wall textures. In a sense you could say the game has come into its own since that point, having developed enough credence within the gamer population to not actually require Raymond’s lovely Uncanny Valley face to help draw attention to the series. The AC franchise has matured brilliantly since its original title, having more or less perfected the idea of a “living” virtual city, with the inclusion of beggars, guards, prostitutes, thieves, continuous waves of background chatter and fights that break out if you push someone over in a crowd. Outside of the context of the game, such a list would make you think “Oh, Croydon.”, but within a game, it only helps to colour the setting with a sense of humanity.

That sense of humanity was extended in Assassin’s Creed 2 with the introduction of Ezio, a character who had a range of charm and likeable characteristics despite spending the entire game assassinating guards. And now we’re back to Ezio’s Italy. The original game’s distinctively odd-but-intriguing supernatural cliffhanger gave way to Assassin’s Creed 2, whose own odd, supernatural cliffhanger brings you to the second chapter of Ezio Auditore’s Italia story. Last time you were trailing Ezio as he entered into the world of the 16th Century Italian Assassins; now you are following him as he takes control of an entire clan of killers.

But even before his personal rise, Brotherhood is about the fall and reconstruction of Rome. The game begins with the Borgias, a political family related to the then-current Pope, who have started infiltrating Monteriggioni which leaves you to defend the city from its turrets as the invading enemies slowly break down the city’s defences, stream in, and inevitably take power. It’s a lost cause to be fair, but your first significant battle here lays the groundwork for the rest of the game’s battle formula.

And it’s a varied formula, one that tries to give you combat scenarios that range between the usual assassinations and sword-to-sword stuff to (honestly) an on-rails shooter interlude with an ancient wooden machine gun. Even the basic melee has been revised. Enemies are now faster to attack and more aggressive than in the previous titles, meaning you’ll spend less time standing in one place, waiting to counter their blows. Instead you have the option to perform Execution Streaks, pushing the left-stick toward your next target and attacking, and then again, to link kills.

But the result of the aforementioned siege is a broken Rome, an Assassin guild that is out of operation, and Borgia influence over key parts of the capital. Oh, and remember that mechanical-looking apple from Assassin’s Creed 2? The one with mysteriously supernatural powers that you vowed to keep safe? That’s been lost to the Borgia as well.

That’s the first twenty minutes of the game in a nutshell after destruction Monteriggioni, which follows on with Ezio’s appeal to re-develop the Assassin clan, take out the influential Borgia towers that have sprung up in various areas, rebuild Rome and get back the Apple of Eden from the corrupt political powers.

But this isn’t the third in the series by any means; it’s a direct follow-up to AC2, the extension atop the series’ single-storey flat of a plotline. It’s a rough metaphor, but what I mean to say is that the game uses all the same architecture – both literally, in the setting, and figuratively, in the gameplay, look and writing.

The game doesn’t change its footing drastically from any of the preceding titles. If you already thought the plotline felt like something Dan Brown wrote on the back of a beermat then you’re in for more of the same, albeit a lighter version of what you came across in the last game; the modern-day plotline essentially hovers around the material of the sequel without making much leeway. It’s not a serious criticism for anyone used to the franchise’s established tendency for taking mere baby-steps when it comes to solving the mystery of what on Earth is actually going on. But Brotherhood is a bit more close-lipped than its siblings, cementing its status as an in-between title that bridges the gap between AC2 and the future AC3.

On the other hand, Brotherhood does successfully join up the game’s two plots. The twin storylines of the present-day Abstergo runaways and the historical Ezio all end up funnelling back to Rome and Monteriggioni. The last time we left our contemporary gang of assassins, Desmond and friends were legging it from the Templar-run Abstergo facility. Now they’ve road trip’d their way to the ancient home of Ezio in Monteriggioni, setting up camp there in an attempt to use their home-made Animus machine to filter through Desmond’s genetic memories and find out where the Apple of Eden is before the Templars swipe it. Often you’ll be brought to the same place in two different eras, tying the present and past together in a way that neither of the earlier games were able to do coherently. That’s the main difference between the original sequel and Brotherhood, right there: this game is tighter, to the point.

AC2 started its story off at a slow jog, with a purely functional introduction that slowly nannied you through the basic movement controls. Brotherhood, on the other hand, hits the ground running – hurtling you into the centre of the supernatural plot that you found yourself in at the tail-end of AC2. The result is a far more concise plotline that immediately marries the game’s penchant for bizarre mystical stuff with its devotion to the historical setting.

But the game retains its unblinking focus on Ezio for the most part. AC2’s puzzles are largely absent. You’ll remember the ones I mean – the cryptic interrruptions that had you finding hidden images in paintings by hovering a cursor across every inch of the canvas. Similarly, the modern day Desmond story only really forms the basic bookends to the historical meat of the game. You’ll be able to pop out of the Animus whenever you like, but it’s not necessary to the plot beyond the bit of flavoured banter you can have with your gang, and the ability to explore modern Monteriggioni. Actually, it’s a bit of a bizarre system: The second you step outside of the confines of the building to explore a countdown timer will pop onto screen, giving you ten minutes before you’re instantly teleported back to your base – so any thorough exploration will inevitably be cut short.

Strangeness aside, it doesn’t really matter, because you’ll spend most of your time getting together your clan of assassins. The long story is that there are numerous Borgia towers across the city, and for each tower you infiltrate and burn down you’re able to add additional members to your group. You’ll find them via icons marked on your map, which will bring you to an everyday citizen being taunted by a group of guards. Kill the guards and the citizen will decide to join your ranks; from here on they can be called on at any time to help you assassinate someone you’ve selected. It’s a more complex and hands-on approach to what was possible in the previous games – paying for the help of a small group of disposable thugs. Assassins can be levelled up, sent out on assassination gigs for training, and told specifically who to attack and when. It’s stupendously helpful, particularly in situations where you’re just not bothered, when you’re getting into a scrape, and in the inevitable scenario where you’re halfway up a tower and realise an archer is taking pot shots at your tail.

The ability to call in help allows you to focus on your objective and have others take care of distractions as you wish, but pacing in the game is still often a bit hit and miss. Ground-based missions, the kind that don’t give you the opportunity to run from roof to roof, are frustratingly unnatural. Brotherhood’s escort quests are essentially exasperatingly slow Christmas shopping simulators compared to the flow of the rest of its gameplay, but generally speaking Brotherhood swiftly progresses from mission to fight to mission.

It also adopts one of the more interesting multiplayer concepts we’ve seen in a while, one that will be familiar to anyone who played The Ship. Its conceit here is that you play as a Templar who has been hooked up to an Animus for training. Each six-player, 10-minute session has you in the role of both an assassin, attempting to locate and take out a fellow player, and a target for your rivals. Observation is the name of the game, because in order to succeed you need to act as if you are an NPC. Running up walls and hurtling yourself into crowds will only get you noticed by your pursuer and the player you’re attempting to take out.

Points are awarded for each successful assassination, with the reward depending on how exactly you made your hit and how stealthily you managed it. It’s a game of cat and mouse, and Brotherhood implements it perfectly, turning its PvP into the most nail-biting experience of the game. It’s a shame it’s as buggy as it is. Even in a full six-person session the game will often fail to assign me a new target after I finished off my last. It seems the only solution is to be killed and respawn elsewhere, which obviously isn’t brilliant for the kills/deaths ratio. But assuming a patch is incoming, and taking multiplayer simply in terms of how it implements a good idea, Brotherhood’s stealthy deathmatches are undoubtedly intriguing. Compare the mode to the reams of Capture the Flag variants that riddle multiplayer games and you could even call it refreshing. But it’s still a niche attraction: Turning observation and mimicry into a part of gameplay is incredibly interesting but a novelty game mode such as this will always be stuck deep in the shadow of big name multiplayer titles.

But regardless of such shortcomings, Brotherhood’s success lies in taking what made AC2 work and simultaneously making it more coherent and more cinematic. It’s an exercise in perfecting what you’ve already got working; you’re not going to find much in the way of completely new material, but this is a superior game to its predecessor and a solid bridge to the next entry in the series.

Live and breathe as Ezio, now a legendary master assassin, in his…

Live and breathe as Ezio, now a legendary master assassin, in his…