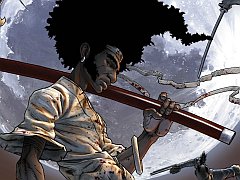 In a hack ‘n’ slash genre dominated by God of War, Ninja Gaiden and Devil May Cry, you need something pretty special on your hands to stand out. After spending five minutes with Afro Samurai we thought Namco’s game of the popular anime series might have a chance. We were dazzled by some lovely cel-shaded visuals, copious amounts of gore and a control scheme that allowed you to have instant fun. Hours later things weren’t nearly as rosy.

As the titular Afro, a samurai who always looks unprepared for the action that’s about to take place and smokes cigarettes, you’re fighting to get the Number Two headband, which will allow you to fight Number One, the man who killed Afro’s father. In the TV show everyone and anyone challenged for this Number Two headband, so it’s no surprise to find a similar situation in the game. It’s actually a neat set-up for the many boss fights you’ll have to play through, and makes a nice change from simply fighting increasingly hard goons all working for the same evil overlord.

Initially the combat seems like good, simple fun. You’ve got a strong and weak attack, and a kick, which in combination can result in some pretty flashy moves and brutal finishing blows – this might be a cartoon, but enemies (male and female) can be sliced clean in two. You also have a magic pendant which allows you to slow down time and perform special moves. You can opt to use up this magic pendant energy in short bursts, performing charged attacks, or blow it all on a long chain of instant kill slices, enabling you to take out an entire room in satisfyingly bloody fashion.

Topping off what is one of the most gloriously violent games we’ve ever seen is the ability to target certain body parts while using a special focus attack. If you grow tired of simply hacking topless female stripper samurai in half, why not target their arms or head? There’s even a mini-game of sorts tied into this mechanic, which is a novel idea and makes the most of the game’s most interesting combat mechanic.

It’s all pretty solid for the first level or so, but then repetition starts to kick in. There’s nowhere near the degree of skill required in the likes of Ninja Gaiden, and the progression in terms of moves feels basic. Fighting isn’t what you’ll be doing all of the time: Afro’s able to perform all the expected moves of a samurai warrior. At times you’ll need to wall run, run up walls, cross narrow beams, kick through doors and activate switches, by kicking them, obviously.

Other issues start to rear their ugly heads before too long, including an occasionally terrible camera (you have full control over it, but that’s not ideal during combat), frustrating boss fights that make you want to throw the controller across the room, terrible platforming sections towards the end of the game, a story that makes only slight sense if you haven’t seen the TV show, and some poor signposting of objectives. I found myself having to use the in-game navigation tool, Afro’s side-kick Ninja Ninja, just to figure out where I was supposed to be going as the game often shows you things in mini-cutscenes that aren’t as close to your location as they seem.

All these issues are a real shame, as a lot of effort clearly went into making Afro Samurai look and sound the part. Afro and Ninja Ninja are both voiced by Samuel L Jackson, Ron Perlman (Hellboy) plays Justice, the owner of the Number One headband, and there’s a decent supporting cast. The soundtrack is top class too, produced by Wu-Tang Clan member RZA, which fits the look of the game to a tee. Visually it’s striking to begin with, with Afro and the many enemies you’ll encounter being brilliant virtual representations of their cartoon form, but before too long you’ll grow tired of the repeated locations, strange automated enemy animations and the slowdown during enemy-packed battles.

The bad news for Namco and Afro Samurai fans is that the game falls into that not good but not bad category. Fans of the show are likely to get a kick out of the solid virtual representation of the key characters and locations and will probably enjoy the combat for a few hours. Problems will become more and more intolerable though, especially towards the end of the game where bosses are bordering on unfair, and platforming sections repeatedly make you want to quit the game there and then. Hardcore fans of the genre are even less likely to get anything from the game, with the combat system simply not packing enough depth to offer any significant reason to invest in the game.

The bad news for Namco and Afro Samurai fans is that the game falls into that not good but not bad category. Hardcore fans of the genre are even less likely to get anything from the game.
6 Looks brilliant until all the repetition Great soundtrack Combat is too simple Frustrating at times