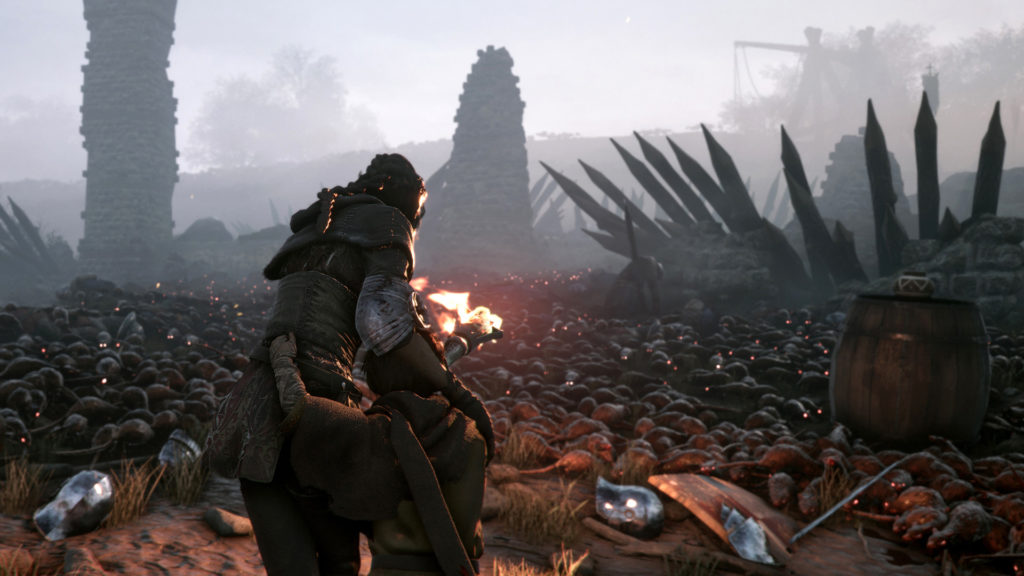 Vampires! Werewolves! Zombies! Creatures from the deep! Is it just me, or is publisher Focus Home Interactive fashioning itself after Universal Pictures? It seems to have a sweet fang for classic monsters, partnering with a pool of studios across a number of genres in order to thrill and chill us. The latest offering is A Plague Tale: Innocence, from developer Asobo Studio, and in place of traditional ghouls there are rats. But these are not traditional rats. They erupt from the earth, like the Locust in Gears of War, and they swarm and devour like piranha, reducing bodies to bones in a moment. Bad news for the murophobic, as well as for those hoping for a good Frankenstein game to round out Focus Home’s set.

In truth, though, A Plague Tale is less enamoured of what scurries in its shadows than it is of its human heroes. These are Amicia, a teenage girl, whom we play as, and her brother, Hugo, who can’t be any older than five. The story unfolds in the Kingdom of France, beginning in 1348, in the midst of the Hundred Years’ War, as the Black Death blankets Europe. We quickly discover that, as tales go, this one is of the tall variety. Despite being earthed in muddy history, the game is rooted in supernatural soil; early on, one servant hears of people being bitten in the nearby village and laments, ‘Famine, war on our doorstep, and now vampires.’

The children are part of the noble de Rune family and live in a lush and lordly estate in the French countryside. When brutal disaster befalls the family, Amicia and Hugo are forced to flee. Giving chase is The Inquisition, lead by Lord Nicholas, who seems like anger in armour plating and who wears a helmet with a cross cut out of the visor. For reasons that come into relief later on, The Inquisition wants Hugo, who suffers from a sickness of mysterious origin that lurks in the blood, causing dark veins to creep up his arms and neck like vines of ivy. Looking for a cure, they go in search of a master alchemist; en route, allies flit in and out like flies, but the siblings remain in sharpest focus. 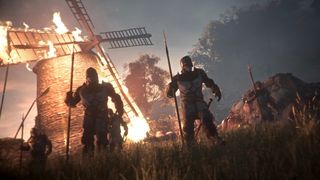 Play, on the other hand, is a blurry blend of third-person stealth, puzzle solving, and fleeting slivers of action. Being outnumbered and outmuscled, Amicia – often clasped hand-in-hand with Hugo – is better suited to sneaking past her opponents. This isn’t a matter of creativity or patience so much as obeying visual cues in a certain order. For each guard, there is always a corresponding environmental solution – a metal distraction to be dinged with a rock, say, or a convenient wad of shrubbery to shuffle through. Due to the tight linearity of each area, your movements feel funnelled and constrained, the stealth boxed in and by the numbers.

Things liven a little when Amicia is forced to defend herself. She wields a sling – the quintessential weapon of the underdog, dating back to David and Goliath. It’s a pleasure to use, whipping it into a spinning wind-up before pelting your foes with a pleasing thwip, as the leather looses its load. You have the choice of a range of projectiles, like rocks, clumps of incendiary mixture, and bait, with which to lure the rats. This is the game’s most wicked and appealing flourish. The rats hate light, and will quiver excitedly at its fringes, waiting; thus snuffing out a lamplight and leaving an unsuspecting soldier enveloped in a furry flood is often your only option – it also happens to be fun.

And I found myself treasuring fun whenever I saw it flicker by; often, I was toiling away on the game’s puzzles. These will bother no one. Because of the rats, you’re lighting braziers to clear a path that’s safe to tread (you could almost think of the rats as dirty black lava). There are blocks to push so as to gain a ledge with which to climb. There are swivelling torches that you use to blanket your allies in safety while they pull a lever or some such contraption. The puzzles hardly call for a pen and paper, but they are a pleasing distraction; they cross-hatch with the action and stealth so that each element diverts from the last. 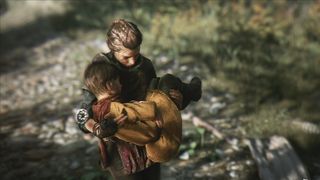 Pressing you on throughout is the narrative, which, I’m pleased to report, kept me curious – despite being heavy-handed. The characters you collect along the way seem to read to you from their bio sheets (‘Our dad was a piece of rubbish,’ says one, ‘Tried to beat us one time too many, so we skidaddled’), and the later acts are lorded over by a pantomime villain (described as ‘a vile heretic driven mad by power’), who looks more ratty than most of the rats – with a milky eye and sharp, stumpy teeth. But it’s all told completely in earnest, and I found myself wanting to unravel the mystery at the middle of the plot.

Unfortunately, the mystery that took up most of my attention was the accents. In the English version, lines are delivered with a faux-French lilt. At one point, as Amicia mourns her dog, she says ‘Goodbye my darling dog,’ but it comes out ‘Guudbye my darleeng doag.’ Why not simply speak in your normal tone? Surely we can take it on trust that she’s French? Elsewhere, Hugo’s childishness chafes; one sequence sees you heading for an aqueduct, which he calls an ‘ackyduck.’ When he suggests to Amicia that ‘It’s not good to be alone,’ (shades of Boris Karloff, in Frankenstein, who groaned, ‘Alone, bad… Friend, good… ’) I found myself firmly in disagreement.

Nonetheless, A Plague Tale should be played, if for no other reason than to walk a little in its world. Where the writing may falter, the story hangs thick in mood and colour. Olivier Deriviere supplies the score, and, as was the case in Vampyr and Get Even, he moulds the music around the play with keen understanding, if with a slight insistence – chivvying you with cellos and shivering strings. The artists at Asobo Studio have concocted a velvety brew of damp moonlight and morning vapours, of late-afternoons tinged with coppery sun. And seeing such peaceful pastures take on the dank air of a pesthouse, oozing with mustard fog, tells you more about Amicia’s character than anything she says. Weighed down by responsibility to Hugo, forced to grow up fast, and failing to protect her family: it isn’t the rats but the scratching and gnawing of guilt that gets to her.

Available on: PlayStation 4 [reviewed on] Xbox One, PC