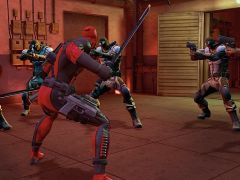 ‘Press A to make a stink pickle or press B to kill germs.’ This is the choice facing Deadpool as he stands in his bathroom at the beginning of the game, and it sets the tone for the rest of it. It’s not Shakespeare, but is exactly the kind of humour you’d expect from the Merc with a Mouth. Nolan North’s take on the character is utterly bonkers and laugh-out-loud funny, and High Moon Studios has done a great job of treading the thin line between outright vulgar and tongue-in-cheek, giving all three of his personalities the perfect balance. While nothing across the brief five hour campaign tries to reinvent the wheel, its mechanics are passable enough to enjoy North’s performance.

As a character who has a habit of breaking the fourth wall, the opening sees Deadpool in his apartment being presented with the idea of starring in his own video game. After expressing his displeasure at the script which arrives at his front door, he heads off on his own ad-libbed adventure.

Everything here is standard action fare: a basic set of weapons and guns that can be purchased and upgraded with points (entitled DP) earned through combat. The higher the combo you can rack up without taking a hit, the higher your DP bonus. Plus there are gadgets at your disposal, including grenades and landmines, and the ability to switch between all tools at Deadpool’s disposal using the D-pad adds a good sense of fluidity to combat. Teleportation can also be used to avoid attacks, but the inability to move through or over small objects in the environment makes it more cumbersome than it need be.

Most of the combat resorts to button-mashing to deal with the majority of enemies, pausing briefly to teleport-counter enemy attacks as the indicator hovers above their heads in a similar style to Batman’s much loved Arkham series. Beating enemies can become tedious, but the game does a good job of throwing various enemy types at you simultaneously, which requires use of Deadpool’s full arsenal. The gunplay is pretty simple too; again unlocking new weapons, increasing damage, rate of fire and unlocking new combos to make them more useful. What’s good is that you only unlock the ability to purchase new upgrades through the use of a weapon, so players simply can’t stick with one sword while upgrading the rest of their arsenal. Deadpool also provides constant in-battle narration, but sound bites start to repeat far too soon for it to be enjoyable.

The one thing that breaks the flow of combat is the often frustrating camera. Choosing to manually aim your gun requires players to transition from the over-the-shoulder camera to standard view, and it tends to get lost amongst intense action. Deadpool can disappear when close to walls, and enemies at times vanish from view completely, making it easy to be caught with an attack, thus breaking your combo. You can always readjust the camera using the right analogue stick, but in the heat of the battle, you either need two thumbs or to be immune to carpal tunnel syndrome to be able to use it. There are also frequent frame-rate drops when fighting large numbers of enemies, which can hamper your combo chain.

High Moon has also insisted upon shoehorning some platforming sequences to break up the action, but, as with most action titles, these just become frustratingly boring. Any mistakes you make don’t end in death thanks to Deadpool’s teleport ability, transporting you back to the start of the sequence, but it still feels like padding for an already short running time.

Deadpool’s most enjoyable and creative sequences are found in his dance with Death. There are some truly bizarre gameplay sequences which can only be likened to Suda 51’s Shadows of the Damned, including a carnival ride on a love boat and Cable’s constant badgering to take matters a little more seriously. Death and Cable are just two of many cameo appearances from the Marvel Universe, and for anyone who isn’t familiar with the characters included, there is the option to view a quick bio (narrated by the man himself) when they first appear.

While much of the game feels like your bog-standard action title, it’s the eponymous joker that sets it apart from the pack. His every remark should repulse, but the great presentation of his character means every scene is spot-on. There are tons of references to other franchises, including an excellent Zelda dungeon and even a shout out to Altered Beast.

Deadpool is a great character wrapped in a standard (and short) action experience. It can be fun in quick bursts, but the lack of a real challenge until the very end means it tires quickly. The inclusion of a wave-based challenge mode adds some replay value, but it’s a very limited add-on that fails to intrigue. By sticking to a generic formula, it undermines the way Deadpool literally tears up the script.

Completed the main game in 5 hours.