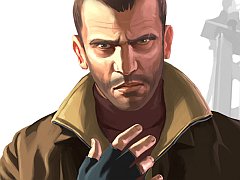 When we reviewed GTA 4 on Xbox 360 and PS3 earlier this year we made some pretty bold statements. Here’s probably the boldest: GTA 4 “has moved video games on to a point that most developers just won’t be able to compete with”. Looking at it again, a fair few months since we’d driven the streets of Liberty City, that was perhaps overstating things slightly (everyone can get caught up in the moment), but it’s still abundantly clear that GTA 4 is a high point in video game history, and just as good on the PC now as it was back in April on console.

We won’t explain just why we love the game so much (you can get a full, lengthy run down from our console review), but for those completely in the dark, know that you’re going to get open world action that makes you care about the main characters in a way we doubted would be possible – at least in this generation. As an action game it’s top class, it’s larger and more expansive than practically every other non-RPG released this year, and it’s got visuals to die for. Having sunk hours into the PC version it’s still a sight to behold.

Instead of re-treading old ground, we’ll rundown how the PC version of GTA 4 has been handled, including the performance on modest gaming rigs, and the extras that Rockstar has included. Performance first then, and this is probably our biggest concern with the port. To put it bluntly, you’re going to need a very beefy machine to get the game running well. Even the game’s suggested settings caused our quad core, 8800 GTX equipped machine to struggle, and this was after we’d lowered the resolution to well below our monitor’s native resolution.

To be fair, when we finally managed to get the game running well, it still looked superb, but it seems it’s going to be some time before you’re going to be able to set all the graphical options to max and enjoy the show. A nice touch is the way the game shows you what the visuals are going to look like as you make changes, removing detail in the distance as you slide the view distance slider down from the hopeful 100 per cent to a more realistic mid twenties number. Texture quality appears to be the real killer, with anything above medium causing big issues with our non-SLI setup. It’s hard to say for sure without comparing side by side, but a modest gaming rig should be able to pump out visuals at least on par with the console versions.

Controls next, and here Rockstar has done an excellent job. Mouse and keyboard controls work great for the most part, obviously excelling when it comes to gun-play, but even driving isn’t so bad with the WASD keys. It’s not completely ideal though, so we’d recommend you have a gamepad plugged in at the same time – preferably the 360 controller that the game recognises automatically. You’re able to switch between the two control setups on the fly, so it’s perfectly possible to dump the pad when you’re done driving, returning to the keyboard and mouse to tackle some goons with your AK-47.

Perhaps more exciting than visual and control tweaks is the brand new video editor. In the PC game you’re able to record 30-second clips and then edit them together using the in-built editing suite. We’re not experts (at all) when it comes to video editing (apart from Seb), but in 30 minutes or so (including play time) we were able to put together a fairly amusing short video, manually positioning the camera, zooming, panning, and other things that are over our heads. We ended up with a rather dramatic scene showing Niko being shot by a cop’s shotgun, before falling to the floor in slow motion. Not Oscar worthy material, clearly, but we can see YouTube being dominated by this stuff in the near future. Once you’re done editing the video, inserting music and adding any text you think will improve the film along the way, you can save to a 720p WMV or upload to the Rockstar Social Club – both took a fair amount of time, but the results are worth it.

The final tweak of any real significance is the increase in multiplayer numbers from 16 to 32, at least in the Deathmatch, GTA Race and Free modes. It’s one of those things that you assume is going to be great, but it’s hard to know how much difference it’s going to make until you play it for yourself. We’re glad to report that it helps and awful lot. While we really like GTA 4 multiplayer on Xbox 360 and PS3, at times the games felt a little empty. On PC, with up to 32 players running around and driving cars, the game feels more alive. If you’re after the best multiplayer version of GTA 4, the PC game wins hands down.

Aside from the aforementioned performance issues (we expect people will be using GTA 4 as a benchmark tool for years to come) there’s the issue of all the apps that need to be running in order to play the game. If you want to play online you’ll need a Rockstar Social Club account (free) and a Games for Windows LIVE account (also free), and both of these must be running. Add in Steam if you’ve got the digitally distributed version, and that’s three apps all running while you’re blasting away gang members. Our experience was quite painless, with our Games for Windows account linking to our Rockstar Social Club account seamlessly, with the only odd thing being how our friends were split between Steam and the GFW service. Still, it’s nice to be able to earn Achievements (tied to your gamertag) – something few PC games support.

If you’ve been waiting for the ultimate version of GTA 4, then this is it, providing you can put up with a fair amount of hassle to get the game running well and all the services you need to sign up to in order to play the game in the first place. The mouse and keyboard controls are great, the video editing suite is a brilliant bonus and the enhanced multiplayer is what the game really needed. There’s no doubt about it. GTA 4 is one of the best games of the year and as such one of the best we’ve ever played.

If you've been waiting for the ultimate version of GTA 4, then this is it, providing you can put up with a fair amount of hassle to get the game running well.
10 An amazing single-player experience Video editor is great Improved online play Needs a mega PC to run well