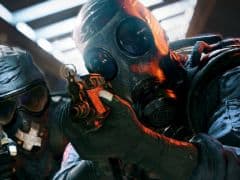 Listen, let me be frank here. (You can still be Garth.) Rainbow Six Siege is, bar MGS5, my most anticipated game of the year, and I hate games. I saw it behind closed doors last E3, and (again) save for MGS5, it was comfortably the best thing there. 5v5, small maps, hostage rescue/protection, an intriguing destruction mechanic that forces players to choose where they breach and where they defend, rather than relying on traditional choke points. Back to basics, it screamed. No Fucking Around with selectable perks and killstreaks. Just you versus them. It was the most un-Ubisoft Ubisoft game in a while: no towers, no upgrades, no open-world, no hopping over a dead kid’s gravestone. How could the Montreal dev team go wrong? (Surely not by, say, adding backstory to a game that needs none. I mean, who would do that?)

Anyway, having played the alpha I can say that so far Ubisoft has not Fucked It, although there is still plenty of time. It currently features two maps: the leaked plane level, and a large suburban house that’s ripe for getting violently redecorated. Moment-to-moment it feels like a mix of Counter-Strike’s tension and CoD’s shooting, and it takes a little while to get going. Teamplay is imperative in Siege, and each member can only play as one of the five classes: you can’t double up. Having players perform a mad dash to select the character (and gear) they want before someone else seems a bit reductive, at first. It forces them to compete against each other for the ‘best’ stuff, stopping them playing as the class they’d prefer on a lot of occasions.

Give it a few matches however, and the system seems less punitive and more a mechanism to ensure that players try out all the classes, and more importantly get comfortable with their equipment and class-specific perks. This is especially important in public games. As tempting as it would be to just pick a team full of assault or heavy equivalents, your chance of winning would decrease sharply against a more evenly-balanced team with even a rudimentary knowledge of the map and mode.

As such, it’s up to you and your team to work together and get the best out of your gear. Montreal has kept the planning phase of the old Rainbow Six, but instead of sitting around a table looking at a map and going ‘yeah, these doors are a bit of a pisser’, instead it’s tied into Siege’s focus on constantly-pressurised planning and decision making. You’ll get a couple of minutes grace to either fortify the hostage room and surrounding areas, or send in drones to work out where the hostage and enemies are before it all kicks off.

The first few games I played were a bit of a wash, with players treating it like CoD and spending more time attempting to wipe the other team than anything else. (I didn’t actually see anyone, at all, in the very first round.) After a while though, Siege starts to gradually boil down into an experience resembling the Rainbow Six of old, forcing teams into more tactical matches. Most of this is due to the short, but plentiful, rounds you have to complete in order to win.

Even without mics (which are very much encouraged ) there’s a natural level of teamplay that cleverly builds over a game of Siege. There’s no way of playing five or so rounds of attack and defence without learning something about your own team: who’s the best shooter, who wants to be the first in the door, who is better at grabbing the hostage. Before long I was breaching reinforced windows for my team to rappel through, or fortifying ‘my’ doors (as in the ones that I had, over time, just out of habit become responsible for) without a single word from anyone.

There are moments of triumph when it all comes together: using a sledgehammer to knock through a barricade and watching your team pile in, crashing through the roof into the room below with an explosive charge, shooting out a section of wall and tossing a flashbang in as the team approach from another side. A good team with a solid plan will often win out over ‘superior’ players, and it’s immensely satisfying to either shut down the attackers as they enter the house or nab the hostage and get them out without nary a bullet fired.

It’s a lot of fun, and will no doubt be even more so when played with actual friends and not Internet Bastards. Still, there are a few issues. In my experience the house map is by far the better of the two, with contained killzones and interesting, exciting entry points for the attacking team (rappelling through the windows is always fun, as is approaching an opening upside down). The plane map, with randoms at least, feels a little too big: it’s easy to spend time wandering, especially if you haven’t ID’d the hostage room when on the attack, and in terms of map flow and encounters just isn’t as exciting thanks to the aforementioned size.

There are other issues, too. Hit detection is a little weak at present, and the game is surprisingly bloodless. Movement speed is fairly quick, which is in keeping with the overall arcade feel, but it feels somewhat weird to see players whizzing around, CoD style, when you should all be assaulting the same position. There’s also a matter of longevity: the different classes and abilities are nice, but how long will it be until the game settles into a predictable – and potentially boring – rhythm? Already we’re seeing players setting up the same defences in the same rooms in both maps. Granted, the game gives both teams a choice of set rooms/locations to spawn in, but there’s only so many times you can play people holed up in the master bedroom. The counter-argument is that teams on offence should come up with fresh tactics to defeat them, but it remains to be seen whether the game can offer enough different plays to keep things fresh.

Overall, however, the Siege alpha hasn’t done anything to dampen my excitement for the game. I even used a gold gun. I know, I know.