Darksiders 3 is a Bayonetta-inspired blast 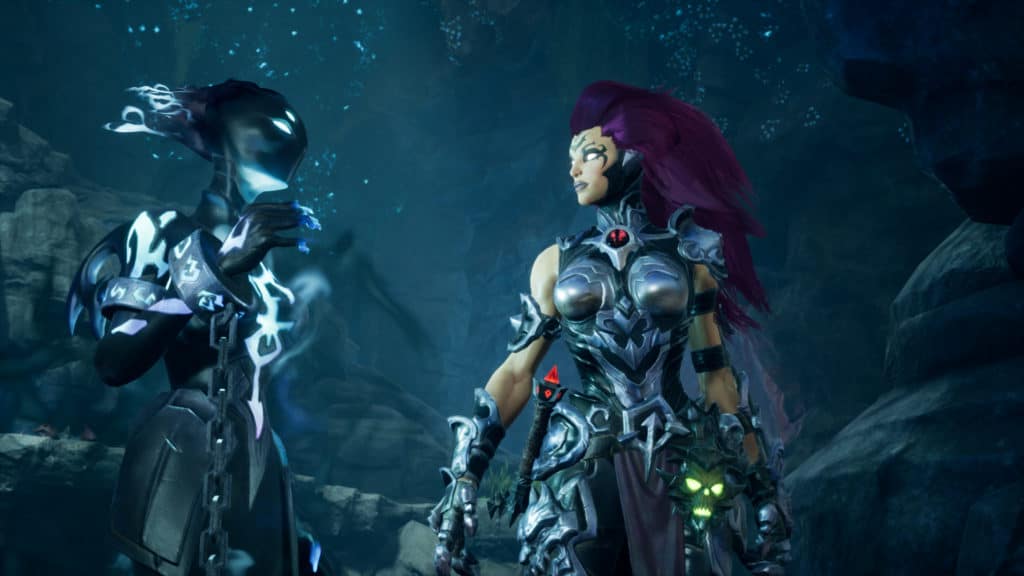 ‘The Four Horsemen’ has always sounded more like a goth-rock band than the bringers of the end time, and the best thing about the Darksiders series is its grinning embrace of this. I often feel I should raise a lighter to the air after each defeated boss, and throw up the devil horns while watching the ludicrous plot unfold. It’s heroes are up for it as well. War, whose white-blonde locks spill over his shoulders, looks like a hooded David St. Hubbins. Death, whose eyes are pooled in streaky mascara, is a dead ringer for Alice Cooper. Continuing the trend for Darksiders 3, Fury, with tribal face paint and a backcombed bush of plum-purple hair, is the spitting image of Siouxsie Sioux.

But where Siouxsie and her Banshees wailed, ‘Your city lies in dust,’ Fury finds herself in a leafy, damp jungle at the end of the world. Indeed, the last time I saw an apocalypse this green was in Hellboy 2. Wandering the streets, long after War’s initial campaign from the first game, I see a verdant land of vines, skyscrapers turned trellises for gargantuan trees, and insects the size of cars scuttling over pulsing egg sacs. It’s what Guillermo Del Toro may have done with The Last of Us. In fact, at one point during the demo, Fury slowed to a walk as her Watcher – a sardonic spectre forcibly bound to her by the Charred Council – appeared in an inky burst, and it brought to mind similar moments of desolate conversation shared between Joel and Ellie – albeit dripping with sarcastic bile.

Fury’s Watcher doesn’t miss a chance to take the piss; ‘If only you had a long, whip-like weapon with which to traverse the gap,’ she jabs at one point, knowing full well that Fury has just that: a threaded row of interlinked blades with the writhe and snap of a xenomorph’s tail. To call it a whip is to do it an injustice; this is the sort of weapon that would give Simon Belmont implement envy. Along with the whip, Fury wields an array of magic powers, a pair of heels so high it looks as if a jump would carry her out of orbit, and – fittingly, then – she spends a lot of time in the air. This makes her a fusion of Soul Calibur’s Ivy, Mortal Kombat’s Queen Sindel, and Bayonetta’s Bayonetta. 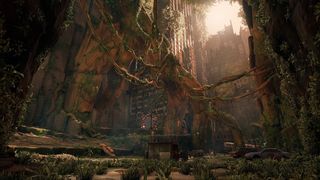 It’s that last one that really changes the atoms of Darksiders’ formula. If the last two games spliced God of War with Devil May Cry, then Darksiders 3 takes on PlatinumGames’ finest witching hour. The counter system, which has long lent heft to the series’ combat, has been winnowed here; there’s no block or parry, only a cartwheeling flip that scrapes you past the claws of your foe. Time this right, lingering till the last moment, and you trigger a slow-motion rush, whetting the whip with red flame, ready for a lashing counter.

It’s Witch Time, then, and, in a move reminiscent of FromSoftware’s shift toward chained aggression with Bloodborne, it kicks the emphasis in Darksiders 3 from defence to offence. It feels like a stiletto in the right direction. Fury’s style naturally compliments the combo meter, as the only defence she has simply sets up further attacks. Among the series’ strengths has always been its ability to borrow well from other games while infusing its own personality into the mix; Darksiders 3 continues the tradition. In keeping with its co-opting of the Zelda formula, it retains the L-targeting of the previous games, the camera letterboxing when locked to a foe, and Fury circle-strafing around them. Elsewhere, you funnel collected souls into your powers to upgrade them, you happen upon new items and abilities which allow you access to new areas, and you track down a series of bosses – each representing one of the seven deadly sins.

During my time with Darksiders 3, I faced off against Wrath and Envy. The former was a barrel-chested brute with a blade in each hand; the latter was a vulture-esque wretch with a vicious beak and a bladed staff. I couldn’t help but smile in satisfaction as the rule of three won the day – inscribed as it is into the stone tablets of video game scripture. My fight with Envy had three stages, each hinging on a timed platforming segment and the chiselling of attack patterns into my brain. It’s a great comfort to know that this classical action-adventure formula has aged like Keanu Reeves (read: hasn’t, really). It’s like sipping English Breakfast tea, or watching Casablanca; it doesn’t matter how many times you do it – it always delivers. 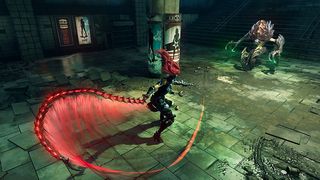 Which, sadly, isn't the case for the game’s frame rate. There were noticeable drops as the carnage blossomed, and while not a dealbreaker, it was irritating. Hopefully, Gunfire Games will continue to refine Darksiders 3 in the run up to its November 27 release date. Far more important than that, though, is one lingering question: when Darksiders 4 rolls around, just who will Strife be modelled on? My guess (and indeed my hope) is for a mopey Robert Smith type, as befits his title.