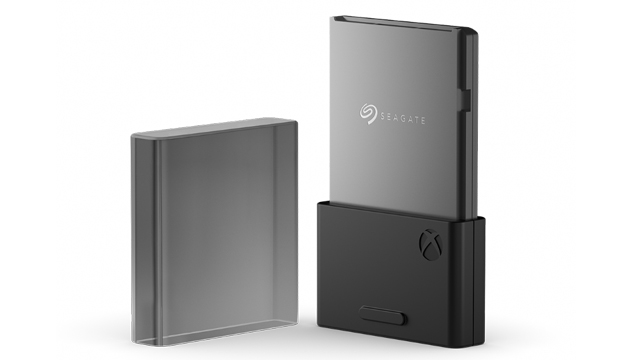 Now Xbox Series S and Xbox Series X consoles are dated and ready for launch, thoughts have been turning to how to expand the storage on each system. From the sounds of reports coming from the US, expanding storage on next-gen could be set to be a lot pricer.

That's at least according to The Verge who report that US retailer Best Buy are apparently going to be charging $219.99 USD for the official 1TB Seagate Expandable Storage SSD drives for the next generation Xboxes, a not-insignificant chunk of the $299 or $499 USD for the Xbox Series S and Xbox Series X consoles themselves.

As a brief refresher— the Xbox Series S comes with 512GB of built in storage, while the more powerful Xbox Series X comes with a full 1TB, both using Xbox's custom NVME SSD which can deliver more than "40x" the throughput of Xbox One. Due to the nature of the hardware, you'll be able to use your own standard USB3 portable hard drives to expand the console's storage for Xbox One and earlier Backwards Compatible titles, but Xbox Series S/X games (and those that recieve dedicated Xbox Series S/X enhancements) can only be installed and run from the NVME SSD.

It's worth noting that the high price is comparable to other similar-tech storage solutions, but it is quite a daunting prospect for those looking to upgrade their launch console's storage in the near future. Xbox have promised that Xbox Series S/X games will have a smaller install size than those on Xbox One, helped by their bespoke "Smart Delivery" system meaning that, for example, your Xbox Series S game won't download and unecessary 4K textures that could take up precious hard drive space, but we'll have to wait and see just how big individual titles are, with current titles such as Call of Duty: Modern Warfare infamously taking up install spaces of upwards of 100GB and more.

Xbox have also said that more suppliers and sizes of expandable drives will be available eventually, but there's no word yet on when we'll see those or when prices may level out, if at all. So if you're planning to install a lot of games on your new Xbox, it may be worth keeping this in mind.

Xbox Series S and Xbox Series X both launch on November 10 with the official Seagate 1TB Storage Expansion Card expected to follow close behind for "Holiday 2020."