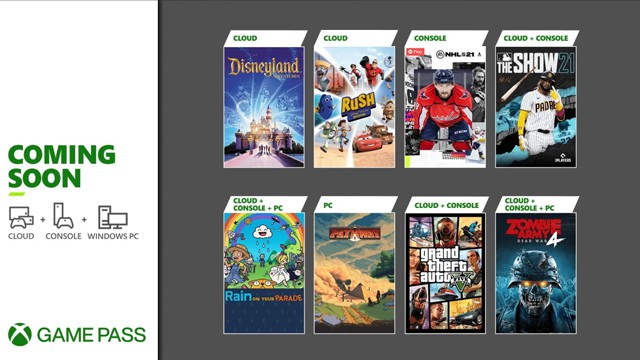 Early April's offerings for Xbox Game Pass subscribers have been revealed on the Xbox Wire, with a returning big name and a few other treats coming to the service over the next couple of weeks.

Grand Theft Auto V kicks things off in a big way this Thursday, April 8 with the game returning to the service (on Console and via the Cloud) for the first time since it departed in May of last year. It'll be joined by Rebellion's Zombie Army 4: Dead War on Cloud, Console and PC. On the other end of the spectrum, on the same day a couple of Disney titles will be available via the Cloud on the service, with Disneyland Adventures and Rush: A Disney/Pixar Adventure both playable on Android.

April 12 will see EA hockey sim NHL 21 added for Xbox Game Pass Ultimate subscribers via EA Play on Console, and then on April 15 cutesy cardboard cloud game Rain on Your Parade comes to Cloud, Console and PC while strategy combat title Pathway lands on the service on PC.

Finally, baseball game and longtime former PlayStation exclusive MLB The Show 21 will make its debut on Xbox consoles straight into Xbox Game Pass for Cloud and Console on April 20, marking the first ever PlayStation Studios published title on Xbox as well as Xbox Game Pass.

Sports fans should be aware that there'll also be several EA Sports titles among the games leaving Xbox Game Pass later this month. Check out the full list below.