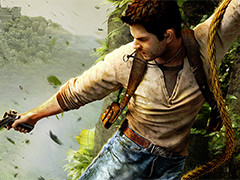 Naughty Dog considered including PS Vita shooter Uncharted: Golden Abyss in next month’s Uncharted: The Nathan Drake Collection, but decided against it because it didn’t tie directly into the main trilogy, community strategist Arne Meyer has said.

Speaking at this weekend’s EGX (as reported by Power Up Gaming), Meyer revealed that the game was “definitely under consideration” for the remastered package “because we were trying to see how we could collect all of the Uncharted games.

“But when we went back and looked at what we were trying to do with the Nathan Drake Collection, we realised that those three games – the trilogy – actually provided a particular narrative arc that led into Uncharted 4. We wanted to keep that as a holistic collection for that reason, and Golden Abyss kind of lives a little bit outside of that.”

Golden Abyss is the only core Uncharted title not to have been developed by Naughty Dog, instead being created by Syphon Filter studio Sony Bend. The game launched alongside PS Vita back in February 2012 and is set prior to Nathan Drake’s adventures in the original Uncharted: Drake’s Fortune.

The game launches in full on October 9, with a playable demo due to hit PlayStation Store tomorrow, September 29.