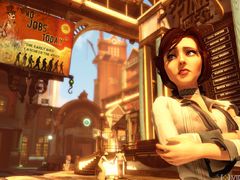 BioShock Infinite has unsurprisingly debuted at No.1 in the All Formats UK video games chart, becoming the second biggest launch of the year behind Square Enix’s Tomb Raider.

While Infinite failed to become the year’s biggest launch, it has claimed the record as the biggest week one for a BioShock title, selling almost 9,000 more copies than BioShock 2.

A huge 64 per cent of BioShock sales were on Xbox 360, PS3 took around 28 per cent and PC the remainder.

Tomb Raider holds at No.2 thanks to a 45 per cent increase in sales, meaning Gears of War: Judgment slips to No.3 with a 63 per cent decline in sales. FIFA 13 takes fourth spot, followed by Nintendo’s Luigi’s Mansion 2 which is new at No.5.

EA’s exbrosive cooperative sequel, Army of Two: The Devil’s Cartel, is new at No.6, a few hundred copies ahead of Black Ops 2 at No.7. EA’s second new release of the week, Tiger Woods PGA Tour 14, is at No.8.

And the new releases keep coming with Lego City Undercover for Wii U at No.12 and Sly Cooper: Thieves in Time on PS3 and Vita showing sings of a flop at No.31.

6. ARMY OF TWO: THE DEVIL’S CARTEL

17. NEED FOR SPEED MOST WANTED

With fantastic reviews and extremely positive word of mouth, 2K must be hoping for a strong second week for BioShock, made more likely thanks to the lack of any must buy new release. Defiance and Ninja Gaiden 3: Razor’s Edge are the only two games of note coming to stores this week.

Sniper: Ghost Warrior 2 is showing worrying signs of a lack of stamina having slipped from No.5 to No.13. The Walking Dead also slumps 11 places to No.14.