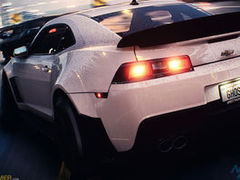 Two-thirds of physical Need For Speed sales were on PS4

The PS4 version of Need For Speed managed to outsell the Xbox One version by 2:1 during its first week on sale, according to data released by UK sales tracking company GfK Chart-Track.

While total sales figures for the racer have yet to be announced by EA, 67% of all physical UK sales were taken on PS4, with Xbox One securing just 33%. The game entered at No.3 in this week’s charts.

The figures do not account for copies sold digitally.

Elsewhere this week, Call of Duty: Black Ops 3 also managed to sell the most amount of copies on PS4, although the sales split was much tighter than that of Need For Speed, with 48% sold on PS4 and 43% on Xbox One.

A PC version of Need For Speed is due for release early next year.