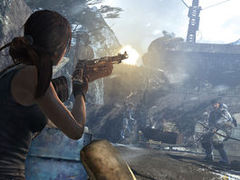 Tomb Raider, the Lara Croft reboot which launched in March 2013 on Xbox 360, PS3 and PC, finally broke even towards the end of last year, executive producer Scot Amos has told Eurogamer.

The game sold 3.4 million units during its first month, but this was reported to be way below publisher Square Enix’s estimate of 5-6 million units.

“By the end of last year – Tomb Raider is in the black,” Amos revealed. “We’ve crossed the line of profitability for the last-gen and PC versions.”

He added: “As a franchise, Square Enix is clearly invested in us. They already let us get kickstarted on a sequel and they backed us with [the Definitive Edition].

“They’ve always been behind us, regardless of maybe what was said or how it was said in the press, and certainly at the end of the year we’ve actually gone over expectations because we’ve managed to get profitability back.”

The Definitive Edition will be released for PS4 and Xbox One on January 31, which Amos says is “for people who haven’t played Tomb Raider yet but who have a next-gen console – this for them to show off their console, to play a great game”.