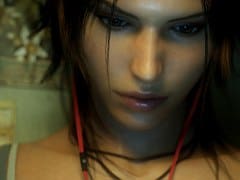 Considering the furore surrounding Crystal Dynamics’ expensive reboot of Tomb Raider, it’s been hard to separate the actual video game from the cacophony surrounding it. We’re not reviewing marketing campaigns, misspeaking developers or PR scandal though. We’d much rather just focus on the game. And as it turns out, there’s still plenty to talk about. Who knew?

As pointless as it is to concentrate on PR bluster, it’s just as futile to focus on what Tomb Raider isn’t. Many will lament the loss of puzzle-heavy exploration in favour of Uncharted-style directed spectacle, but clamouring for a game that doesn’t exist is bloody stupid. Here’s Tomb Raider – it looks incredible, is incomprehensibly slick, and thoroughly good fun from beginning to end.

In fact, Tomb Raider is quite a safe and conservative video game. A spectacular one, absolutely, but not a game that takes great risks or pushes boundaries. And nor does it have to. This is genre fiction for the modern console age – a heady mix of clambering, man-shooting and scenery-tearing blockbuster madness; about as archetypal a Triple-A action game as you could hope to see.

The action takes place on a mysterious lost (Lost?) island somewhere in the Pacific, where a young Lara Croft is shipwrecked after misadventure with her archaeologically inclined boat-buddies. Lara is battered and beaten in the opening minutes by an environment that seems intent on killing her, yet she battles adversity, conquers fears and concentrates all of her powers on the game’s overriding theme: survival.

Any concerns that this Lara would undo all the female empowerment her angular predecessor established should be chucked off a cliff. Lara’s arc is compelling. She’s a strong character with admirable spirit and courage. I know I’d have given up after about three minutes in her situation, curled up into the foetal position and let the waves take me away to the bump-mapped depths.

Compelling, if at the same time not entirely convincing. Unsurprisingly, the action soon falls foul of the Drake-dichotomy, where a character who displays vulnerability and inexperience in cutscenes turns into the world’s greatest killer during extended in-game shootouts. It’s jarring, for sure, and although the narrative at least makes reference to her murderous bent, it’s very difficult to ‘buy’ Lara physically overpowering giant Russian men, mowing down an army’s worth of soldiers with a bow and arrow, and choking out enemies with the force of a Gracie.

How much this bothers you is a choice, really. Clearly it’s an inelegant way to tell a story, and it is more flagrant here than in Uncharted, as Tomb Raider lacks that series’ extravagance and hyperreality. Letting it destroy what is still a cracking yarn would be a shame, as Tomb Raider is just so unbelievably lavish and genuinely entertaining.

While the game sticks doggedly to its core tenets of climbing and shooting, it constantly throws up new ways of playing with these mechanics. Said shooting, while cover-based and dragged-out at times, shifts dramatically from the slow bow-hunting of the early exchanges into a violent and energetic blend of shotgun massacre and third-person brawler, thanks to a series of upgrades that turn Lara into the kind of warrior that could give Raiden a decent scrap.

And what the climbing lacks in true peril (it’s very hard to actually mess it up if you’re paying attention), it does its level best to convince you otherwise, as Lara desperately leaps across crumbling chasms, scales burning buildings and slides down ferocious white-water rapids, narrowly dodging spikes and rocks and lava pits as she careers forward at breakneck pace.

When you do mess up, too, you’re greeted with a gruesome bespoke death scene that makes you wonder what the animation team has against their protagonist. They’re as nasty as anything in Dead Space, and while watching Ms. Croft die in hideous ways is a series staple, it’s still shocking when it happens.

If Tomb Raider shares the same DNA as Uncharted, then, it adds depth in place of Drake’s humour and bravado. While the first blast through the story might take 10-or-so hours of fairly consistent forward movement, there’s actually plenty of exploration to do if you’re up for it. Each section of the island (and the story) is divided up into base camps, where Lara can rest, upgrade her skills, mod her weapons and fast travel to other camps.

It’s perfectly feasible to rattle through the story without any exploring whatsoever, but if you’re in an inquisitive mood there is a veritable shit-tonne of stuff to collect. Now, collecting stuff for the sake of it is normally one of my gaming bugbears, but Crystal Dynamics has threaded collecting into the very design of the levels. Even random tat has its own narrative, either one that ties into the main story or tells its own tale, and plenty of collectibles require significant use of the environment and the gear in your tool bag.

There’s a Metroid-esque element to the level design that demonstrates Crystal Dynamics hasn’t lost its knack for puzzle-craft. Seemingly out-of-place elements suddenly make sense once you pick up a new item (like a rope arrow, or a Zippo lighter), and while the main campaign is very short on brain-work (bar a few very welcome headscratchers) there’s actually a decent amount of spatial puzzling for those that seek it out. This style of design can be found in distilled form in the awkwardly-named ‘optional tombs’ scattered throughout the game, too. These single-room conundrums would have harmed the game’s pace if they’d all been mandatory, but I’d still highly recommend tracking them down. The fact you can bail on them if they’re proving difficult is also a fine touch.

It’s that pace that really drives the game, though. Tomb Raider rarely lets up, although it understands the importance of light and shade, of peak and trough. For every extended firefight there’s an isolated climb across evocative scenery. Only one section, mid-way through the game, threatens that balance by chucking too many enemies at you. Other games would continue in that vein and sputter their way to a bland ending, but Tomb Raider quickly rights itself and in fact saves its best moments for the last two hours. Oh, and there’s multiplayer too. It’s about as relevant to the experience as the marketing campaign, and just as easily ignored.

This is clearly the work of superior craftsmen and women. It is extremely impressive, on both technical and artistic levels. With that degree of sheen does come a lack of edge, of course, and Tomb Raider is not a brave game. Nor is it one that’ll likely live long in the memory, but while you’re walking in Lara’s muddy size fours, it is spellbinding.

Single-player played through in 10 hours on Normal difficulty

Tomb Raider is not a brave game. Nor is it one that’ll likely live long in the memory, but while you’re walking in Lara’s muddy size fours, it is spellbinding.
8 Stunning visuals A relentless spectacle Smoke and mirrors mask any real peril Lacking true depth