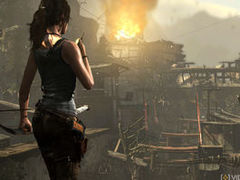 The figure includes the number of copies sold on Xbox 360, PS3 and PC upon its original release and last year’s PS4/Xbox One remaster.

“Tomb Raider ignited and expanded the fan base, pushing the series to a new level. The game’s incredible sales success reflects the passionate response of players,” said Crystal Dynamics head Darrell Gallagher. “Our studio is proud of what we accomplished with the game.”

The next game ‘Rise of the Tomb Raider’ launches on Xbox One and Xbox 360 this Christmas.