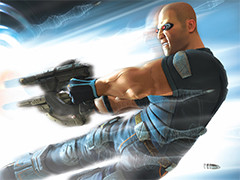 TimeSplitters Rewind in development for PS4

TimeSplitters Rewind, an upcoming fan project featuring multiplayer modes and maps from the previous three titles, is in development for PlayStation 4.

The project was said to have been authorised for a PC release by TimeSplitters’ owner Crytek back in March. But a PS4 version is in development because the developer is “pretty confident Crytek’s going to say go ahead and do it”.

Though the game may not actually see a release on the console – “It’s mostly just us waiting on Crytek’s legal department to give us the go ahead,” adds Hubicka – a release on Xbox One seems even less likely.

“In terms of the Xbox One, we haven’t really looked into the development behind it, because there’s still a lot of details we need to look into,” Hubicka says, citing the certification process and fees as something the team needs to look at.

A playable alpha release is scheduled for this Christmas, with the game said to be around 20 per cent complete.

Crytek acquired the TimeSplitters IP when it purchased series creator Free Radical in 2009.

The developer previously said that it was considering releasing an HD Collection of the previous TimeSplitters titles should a petition for its release reach 300,000 votes. The petition is currently sitting at 80,232.