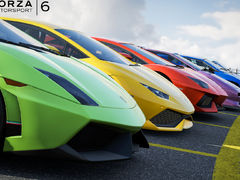 The next Forza game will be revealed at E3 in June

The next chapter in the Forza racing series will be revealed at Microsoft’s Xbox media briefing at E3 in June, the platform holder has announced.

The news comes as the new Lamborghini Centenario super sports car was revealed as the cover car of the next game.

“You’ll have to wait for our Xbox media briefing at June 2016’s E3 Expo for the title or any big details on the next Forza game,” said Xbox. “However, the Centenario will be available ‘First in Forza,’ which means that Xbox One owners across the globe get to experience the virtual version of this incomparable car before it makes its debut in the real world.”

The Lamborghini love begins now, however, via the Forza 6 Super Trofeo series. In the season, players compete in Rivals time trial events, as well as ranked multiplayer Leagues using the 2014 Lamborghini Gallardo Super Trofeo. The best performing players will be gifted the exclusive 2015 HuracÃ¡n Super Trofeo, and also gain an invitation to the series’ second season.