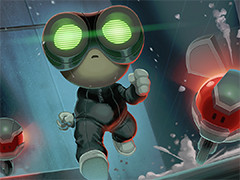 Stealth Inc 2: A Game of Clones is coming to Xbox One, PS3, PS4, PS Vita and PC in early April, Curve Digital has announced.

All versions will be released simultaneously, although a price and exact release date have yet to be announced.

Stealth Inc 2 expands on the original’s stealth-platforming with a new Metroidvania-style world and customisable characters. The game originally released as a Wii U exclusive last October.

“The best thing about making a sequel is the opportunity to look at the all the reviews and comments about the original game and ask ‘What can we do better this time around?’,” said Curve’s managing director Jason Perkins. “With Stealth Inc 2, we’ve not only made a much larger game, we’ve spent a lot of time improving the pacing and balance.”

The Stealth Inc series has already seen over a million downloads across all major platforms to date.