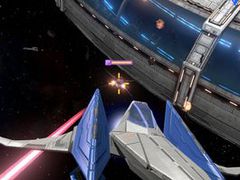 Star Fox Zero will include special support for Falco and Fox amiibo figures, which can be used to unlock exclusive content in the game, Nintendo has said.

Tapping the Falco amiibo will unlock the Black Arwing, which has more powerful weapons but weaker defences. Those who tap the Fox amiibo will unlock a retro Arwing styled after the original Super NES Star Fox game, complete with retro music, which can be used in the first Corneria stage.

You can see these unlockable items in the trailer below. The trailer also shows off the unique control scheme using the Wii U Gamepad to provide an alternate view of the action.

Nintendo has also announced that Star Fox Zero will feature an exclusive downloadable demo of Star Fox Guard, only accessible though the main menu of Star Fox Zero. Save data can be carried over to the full version, so tacticians can pick up where they left off.

Of course, gamers picking up the limited First Print edition of Star Fox Zero get both both games on separate Game Discs, and an exclusive SteelBook case. This package is the only way to get a physical copy of Star Fox Guard.

Those not buying the First Print edition will be able to buy Star Fox Guard from the Nintendo eShop, saving £3 if they have already bought Star Fox Zero from the store and vice versa.

Star Fox Zero and Guard launch April 22, but you can get back into the swing of things now by picking up Star Fox 64 at the reduced priced of £4.49.