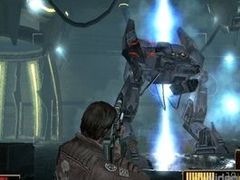 Sony Bend has already got some great results from the PSP with the Syphon Filter titles and it expects to dazzle players further with even more impressive graphics in Resistance Retribution. In a post over on the official PlayStation Blog, John Garvin, creative director, Sony Bend Studios, explained exactly what gamers can look forward to.

“We’re pushing it pretty hard. As you know this is our third game on the platform and we’re constantly making improvements to our engine. Chris Reese, the Technical director and co-studio director, pushes his tech team pretty hard,” said Garvin.

He added: We’ve done a complete upgrade on our animation system, adding support for multiple skeletons so we could implement all the different types of Chimera; we’ve upgraded our character system, adding specular highlights so you can see light reflecting off of Grayson’s leather jacket; we’ve also upped the size of our character textures so everything looks crisp and clean; we’ve put in a more robust streaming system so we can have more detail in the levels, more sounds, more character models, more animations; we’ve created an entirely new enemy system so that we can have more of them on screen at once in Logan’s Shadow, you might see 4-6 terrorists at a time, not in Resistance: Retribution, you can see 15 Leapers at once.

“We’ve also optimized a lot of systems in order to push out our drawing distance so we could attempt to capture the sheer scale of the Resistance vistas. So far the team is doing a great job capturing the Resistance look and feel.”

God of War: Chains of Olympus has set the bar for visual quality on the PSP, but it sounds like Sony Bend’s Resistance Retribution could be a new challenger. The game’s scheduled for release in spring 2009.