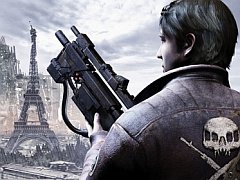 One year ago the PSP received God of War: Chains of Olympus, arguably the best action game to grace Sony’s handheld to date. It worked because it managed to bring to the PSP the series’ trademark spectacular visuals and fluid controls. Now it’s the turn of the newer PlayStation blockbuster series Resistance. With two PS3 games in the bag and a loyal fanbase, is Resistance Retribution the handheld shooter you’ve been waiting for?

Well, it is and it isn’t. Retribution picks up after the conclusion of the original game and follows James Grayson, a British soldier who goes on a rampage against the invading alien Chimera force. You actually start playing once Grayson has been captured and sentenced to death. As a way out of this predicament he’s persuaded to work for French resistance group The Maquis, helping them fight off the Chimera. It all takes a bit too long to get going for a handheld game, with the opening cutscene dragging on, but once that’s over you’re thrown right into the action.

Rather than opt for the first-person perspective of the PS3 Resistance games, developer Bend (responsible for the excellent PSP Syphon Filter games) has quite wisely decided to use a third-person over the shoulder camera. This might not please gamers craving the exact Resistance experience ported over to the handheld, but it works well here and has allowed the developer to build on the tight controls it’s been honing over the past few years.

With the PSP only having a single analogue stick there had to be some compromises made, so while movement is handled with the left stick, aiming is mapped to the four face buttons on the right. This works better than you might think, and is helped by some very generous auto aiming and target lock-on. As long as you’re pointing your weapon roughly in the direction of some enemies, the game will make sure you hit them. There is the option to free-aim by tapping up on the d-pad, but it’s slow and highlights why the auto-aim is so important.

Sadly Bend has chosen to introduce a new enemy to the series that seems designed to break the control system the game is built around. The Boiler is a skinny looking enemy with a swollen head, which explodes when it comes into close proximity with you. Exploding enemies are nothing new, but the problem with Boilers is that they take an awful lot of bullets to kill unless you target their heads. With the auto aim simply not letting you do this, you’re forced to use the manual aiming, which causes more than a few problems.

These enemies appear from nowhere accompanied by a menacing sound effect, and then proceed to head towards you at speed. Unless you know what’s coming and have already moved into position, trying to take all the oncoming exploding nasties down before they blow is frustrating in the extreme. It’s a baffling decision considering the controls work near perfectly in all other situations. The cover system is smart and doesn’t require you to use any extra buttons, snapping you into place when you’re near a wall; advanced actions are context sensitive and clearly labelled with an on-screen icon telling you which button to press; and alternate fire is easily accessed by holding the left shoulder button.

Boilers aside the fairly linear shooting-fest is a lot of fun, with Grayson taking on wave after wave of Chimera of all shapes and sizes, with many of the weapons from the Resistance series making an appearance along the way. Retribution isn’t a hugely original game or full of too many interesting gameplay ideas, but as a pure shooter there’s nothing on the PSP that offers the same slick controls and constant action. It’s just a shame those Boilers had to spoil the party somewhat.

Judged purely on visuals Retribution is a huge success, easily matching the very best looking games on the PSP and outdoing them in many areas. Detail in the environments is excellent, enemy models are large and detailed and the variety in locations means the repetitive gameplay doesn’t start to feel old. There are a few issues with the quality of the voice over work (Grayson in particular seems terribly cast and quite unlikable), but this is a minor complaint considering the overall production quality is so high.

An issue that’s harder to forgive is the save system. While checkpoints are placed well throughout the campaign, actual save points aren’t, so you might find yourself having to replay a large chunk of a mission if you have to turn your PSP off for any reason – not ideal for a portable game.

On top of a single-player campaign that’s well worth experiencing for Resistance and action game fans alike, Retribution also includes a solid multiplayer mode. Playable over a local wireless connection or online using the PSP’s Infrastructure mode, up to eight players can battle out in a variety of team and everyone versus everyone game types. The game type that stands out is Assimilation, in which teams start off even, with one side as humans and the other as the Cloven (half human, half Chimera). The Cloven have a clear advantage on the battlefield and slowly take over the humans, recruiting them for their army. This makes for an incredibly tense experience, with games eventually resulting in one human against seven Cloven soldiers. With rankings, voice chat and solid online performance there’s little to match Retribution on the PSP.

Resistance Retribution is a solid effort from Sony Bend. Bar a few issues when facing the Boilers the controls are excellent, the presentation is superb and the multiplayer modes are unmatched on the handheld. Whether you’re fond of the Resistance series or not, Retribution should be considered an essential purchase for action game fans.

Bar a few issues when facing the Boilers the controls are excellent, the presentation is superb and the multiplayer modes are unmatched on the handheld.
8 Excellent visuals Superb multiplayer Smooth controls Boilers are annoying