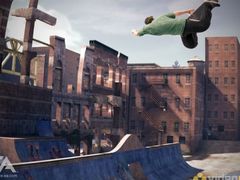 EA has announced the release of the Sakte 2 Rob Dyrdek’s Fantasy Plaza DLC for PlayStation 3 and Xbox 360.

The downloadable content features Rob Dyrdek’s new skate plaza, the centrepiece of his MTV show, Rob Dyrdek’s Fantasy Factory, as well as the surrounding downtown Los Angeles area. The DLC is priced $5 on the US PlayStation Store and 400 MS Points on Xbox LIVE Marketplace.

“I’ve been involved with the Skate franchise since the very beginning and each game has been able to perfectly capture the culture and feel of skateboarding,” said skateboarder entrepreneur, Rob Dyrdek. “I can’t wait to give players a taste of the Fantasy Plaza, my dream skateboarding space. The team at Black Box has recreated the plaza in Skate 2, complete with all the ledges, gaps and rails. On top of all that, there’s still a lot more surprises outside the park that both gamers and skaters will enjoy.”