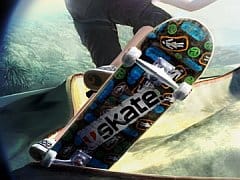 If you’re the development studio responsible for taking the skateboarding genre to new heights, single-handedly stopping the rot that set in after years of the identikit Tony Hawk games, you deserve a lot of recognition and a bit of a break. This is the video game industry though, where what we have is never enough. People are rarely content with a good thing; they’re already looking at what could make it even better and chomping at the bit to get their hands on it. This is the problem EA’s Black Box studio faced when developing Skate 2. The first game did things so well that they didn’t really have many places to go with the highly anticipated sequel.

Skate 2’s set-up is a simple one: You’ve been in prison for five years, presumably for offences against the art of skateboarding (was that just us?), but now you’re out and ready to take back the streets from the heavy handed law enforcers and make a name for yourself once again. The streets of San Vanelona are very different to how they were in the original skate, with skate blocks placed on ideal grind spots and pesky skate police patrolling all the good areas. You’re not alone in your quest to free the city, though, with numerous other skaters on hand to help you out, offering services via a call on your mobile – whether you want a pool drained or some protection from the heavies, it’s all just a phone call away.

With that set-up out of the way it’s very much worth pointing something out, just in case you managed to completely miss the video game press drooling over the original Skate. Skate 2, like its predecessor, is hard. It’s very hard. If you’re coming to the game without any real-life skating experience (like us we should add), and have gained most of your skating knowledge from the Tony Hawk series, you’re in for a tough initial few hours. This isn’t to say that the game isn’t a great deal of fun and that the control system isn’t intuitive – because they both are. You’re just going to have to get your head around a few things before the game clicks.

Rather than learn new abilities and improve your stats as you progress, like in Tony Hawk, in Skate 2 (as was the case in the original) your character can do everything from the moment you enter the game world – the only limitation is your own skill level. Movement is all mapped to the left analogue stick (ground and air), tricks are mapped to movements of the right stick (ollies, nollies, manuals, and flip tricks), grabs are on the shoulder buttons (you can now grab your board while grinding), you have a face button for each leg (allowing you to do one-footers for the first time), and can tweak various tricks while in mid-air using the right stick. It sounds complicated because it is complicated, but it makes sense and you’ll learn very quickly. Learning to do it well is the hard part.

Working through the game’s career mode, which takes place in the free-roaming San Vanelona, you’ll take part in events that ease you into things. These initial encounters with NPCs teach you the basics as you try to pull off tricks for a friendly cameraman, who works for a skating publication. Things soon heat up, with events becoming increasingly difficult, more varied (you can even take part in races for money), and often against pros. Scattered around San Vanelona you’ll also come across numerous ‘spots’- areas where you need to perform tricks and achieve a certain score in order to ‘own’ or even ‘kill’ the spot.

We had hoped that the story mode would be a big improvement over that found in the original game, but once again it fails to make the most of the game engine and world that Black Box has created. Just as in the original most of your enjoyment will come from spending time trying to nail a certain series of tricks, perfecting a line you’ve been working on. This is made all the more enjoyable in Skate 2 thanks to the ability to move around certain objects in the environment. If you can’t quite make a jump, you can get off your board and move the ramp. Simple stuff, but it makes a world of difference to the amount of longevity you’ll get from the game. Having said that, the on-foot controls border on being terrible, so be prepared for some headache-inducing frustration as you try to manoeuvre your skater into the right position.

We don’t claim to be experts at Skate 2 (this is most definitely a game in which an elite few will stand head and shoulders above the rest), but this hasn’t stopped us having a great time messing about in the game world. Find a line, put down a re-spawn marker and you’ve got an evening’s entertainment right there. For all its complexity Skate 2 is also great for novices to pick up and play. Friends who have never played a skating game before will be able to grab the controller and try to put their money where their mouths are, after laying into you for an hour as you repeatedly bailed trying to perfect the same trick. They probably won’t be able to pull it off successfully either, but the core mechanics are so well designed that they’ll be able to have a go.

Outside of the main career and free skating (alone or with friends online), there are a handful of party play modes accessible from the main menu. Our favourite, and something that goes down well no matter who has their hands on the controller, is Hall of Meat. Here the goal isn’t to score the most points performing tricks, but to cause the most damage to your body at a set location in the city. You take it in turns to bail out of ridiculously dangerous tricks, then move in slow motion (Burnout crash mode-style), pulling shapes as you attempt to break every bone in your body.

Tied very closely to skateboarding is film making – something the game’s art direction and camera angles pay homage to – so it’s no surprise to find a decent, if quite basic replay editor. From here you can set up camera angles and save edits to be uploaded to EA’s servers for the world to see on the official Skate 2 website. It’s disappointing that more tools are going to be added as DLC instead of being in the game to begin with, which explains why you can’t add filters, but if you just want to share videos with friends you have all you need. This basic label can’t be placed on Skate 2’s online multiplayer, which offers eight-player skating, group challenges and the ability to create and share your own spots. We’re not sure how popular the latter feature will prove to be in the long run, but even if a few new spots are found it will be a success.

Part of what makes Skate 2 so much fun is how realistic everything looks. While the game world can look a little rough around the edges at times (the cars in particular look quite poor), the skaters animate brilliantly, with real-world physics playing their part wonderfully. Go off balance slightly and your skater will react, trying to right himself; bail and he’ll flail around before hitting the ground in a way that will make even the hardest of hard men wince. Lighting is often quite spectacular, and for the most part the frame rate (in the 360 version tested) holds up well, only stumbling when things get a bit crazy. The included soundtrack is typical skater material, but if you’re not a fan you can also listen to your own tunes using the 360’s custom soundtrack feature.

There’s no question that Skate 2 is a high quality game, packed to the brim with things to do and one of the best control schemes we’ve ever had the fortune to use. For hardcore Skate players the new moves, altered city and new features (getting off your board, moving objects) will make Skate 2 essential, but at the same time perhaps not as big a leap over the original as they’d have liked. For everyone else, if you’ve got time to kill and fancy yourself as the next Tony Hawk, Skate 2 is well worth it. It’s hard and often punishing to the point of frustration, but the rewards make up for all the effort.

There's no question that Skate 2 is a high quality game, packed to the brim with things to do and one of the best control schemes we've ever had the fortune to use.
8 Loads to do Can look great Superb control scheme Moving on foot is terrible