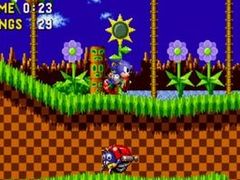 Have you ever wondered why Sonic the Hedgehog can’t swim? No, neither had we – but that didn’t stop us from stumbling across the answer during a brief-yet-bizarre interview with Yuji Naka. For those of you who don’t know, Naka-san is one of the three men credited with creating the blue ‘hog in the early Nineties; he’s also the brains behind the excellent Let’s Tap, a game we’re previewing later this week.

In any case, we had a brief chat with Naka-san at a SEGA event earlier this month, around about the time that half of the UK was shut down due to snow. During our conversation, the veteran developer revealed that Sonic’s design was partially influenced by his love for Lemmings. By which we mean the classic puzzle game, rather than the rodent.

The conversation started when we asked Naka-san if Japanese developers were more creative than their Western counterparts:

“A lot of original old-school games came from the West – one of his favourites being Lemmings – so he says it’s really not the case that one group is better than the others. But does think that Miyamoto-san is amazing.”

Naturally, we followed this up by asking what he liked about the Lemmings games.

“He thinks it might just be a personal thing, but having all these hundreds of different characters moving around with varied movements – he finds that amazing. He was fascinated by it back then, and he doesn’t feel like something that surpasses that has been developed yet. He’d love to [make something].

“He also finds Lemmings a good reference point in terms of character development. Their characteristics were based on the actual animal, even this idea of the mass suicide… although that’s just a myth.

“He assumed that hedgehogs can’t swim, so that’s why he made it that Sonic can’t swim. But then recently he saw a photograph in Germany of a hedgehog swimming, so that isn’t quite accurate!

“Apparently hedgehogs can swim, but they can’t climb out of water. This picture he saw was a guidance thing showing that you should help the hedgehog back up onto a branch, so he can get out. And he [Naka] was thinking, ‘Oh, nobody is helping Sonic!'”

At this point in the interview, Naka-san noticed that one of our fellow journalists was in possession of a Google Phone. The writer, Mr Naka and the translator then engaged in an energetic conversation in Japanese… while we sat and twiddled our thumbs.

Oh, and before any clever clogs posts a comment: we’ve not forgotten about the Labyrinth and Aquatic Ruins Zones – but in those levels he doesn’t swim, he runs through the water. So there.