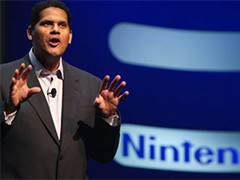 Rebellion still in the dark on Nintendo NX

Rebellion CEO Jason Kingsley has told VideoGamer that he doesn’t know anything more about the Nintendo NX than anybody else, despite rumours suggesting that the console could go on sale as early as this year.

Speaking to us last week, Kingsley praised Nintendo for creating “incredible hardware”, but said that he would have to wait and see what the NX actually is before pledging his company’s support.

“Nintendo are brilliant,” Kingsley said. “They’re a fabulous company and I love them. I always feel they’re quite eccentric. They come up with some incredible hardware. Even the Virtua Boy back in the day was really intriguing, and then the clamshell design of their handhelds. To be honest, I just don’t know [whether Rebellion will support NX]. The only way I can answer the question is, when we know what the machine is we’ll see and we’ll have a look. I’ve always loved Nintendo, I love their games and love their hardware.

“I know no more about [NX] than you do, so we’d be purely speculating,” he continued. “If it’s something that will run our games and if it isn’t some weird wobble balance board or something that’s totally irrelevant to what we’re doing then, if we can and if there’s a market there, if there’s a commercial opportunity, then we definitely want to capitalise on that.”

Rebellion has lent its support to all of Nintendo’s recent home consoles, having released Sniper Elite V2 on Wii U, Rogue Trooper on Wii, and Judge Dredd: Dredd vs Death on GameCube. The Wii U version of Sniper Elite V2 was actually “modestly successful”, Kingsley says, despite it arriving one year after the game’s debut on Xbox 360, PS3 and PC.

Whether or not Rebellion’s future games will come to NX, though, Kingsley can’t yet say. “I can’t say yes, I can’t say no at this stage,” he said, “because I don’t actually know what [NX] is.”

Kingsley’s comments follow a pair of reports last month that suggested Nintendo had kept some third-party developers in the dark about its plans for NX. The platform holder is expected to reveal the hardware later this year with a release rumoured for the end of 2016.

Rebellion’s next game, Sniper Elite 4, launches on PS4, Xbox One and PC later this year.