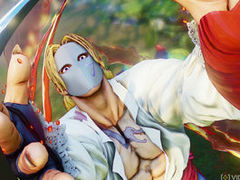 Rainbow Mika is the latest character to join the Street Fighter 5 roster, Capcom has confirmed.

Capcom confirmed today that it will be re-launching the Street Fighter 5 worldwide beta this Friday at midnight UK time. While Mika won’t be available in the beta, you’ll still get to cause havoc with Ryu, Bison, Cammie, Birdie, Nash and Chun-Li.

Take a look at Mika in action below: