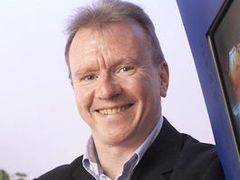 PS4 sales ‘way, way out in front’ of any other PlayStation console, says Ryan

The sales figures for the PlayStation 4 far exceed any previous Sony games console, according to PlayStation Europe boss Jim Ryan.

Sony announced earlier this week that the PS4 had sold 10 million units to consumers since launching back in November, with Ryan later telling CVG that the figure is bigger than even he expected.

“I think if you’d offered me that at the start of November I’d have bitten your hand off,” he said. “If you’d have told me that I’d be standing up on the stage at Gamescom giving that number I’d have been very surprised.

“Particularly given that we’d had some pretty severe stock shortages… less so in the UK – although certainly before Christmas in the UK, but in continental Europe it’s been quite difficult through the first few months of this year, so it would have been faster if we’d had sufficient supply.”

Ryan is then asked how these numbers stack up to previous PlayStation hardware.

Sony is showing no signs of slowing down with the PS4, announcing firmware 2.0 during the conference which introduces the SharePlay functionality.