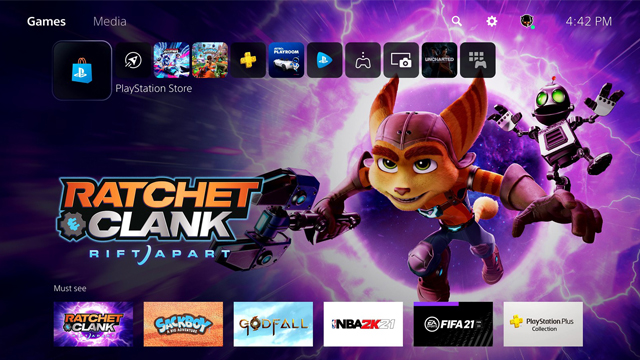 PlayStation has revealed the first look at the full PlayStation 5 user experience (as teased by, of all people, Burger King) in a new video posted to the PlayStation blog today.

The new user interface is headlined by a Control Center when in-game, that also displays a series cards linked to the game you're playing. The first of these cards can show news related to the game, with others showing progress in various 'Activities' suggested by the console. A very cool feature is that the PlayStation 5 can actually estimate based on your own playstyle the approximate time it thinks it will take you to complete said activity —perfect if you're on a schedule but are unsure roughly how far you are from, say, the end of a level.

Supported games will even feature a sort of 'help' function for PS Plus members, by allowing you to browse the card for an objective in a game, press a relevant button on a yet-to-be completed objective and it'll give you advice or even a video hint on what to do next without having to exit the game to consult a walkthrough or a lengthy video that may contain spoilers for later in the game. Cards can be pinned for quick access or even shown alongside your gameplay to consult at any time.

Voice chat and Parties are also shown during the video including interactive notifications you can access without having to drop back to the system menu as you had to on PS4. Parties will also become persistant, and you'll be able to share and watch each other's gameplay to other members of the party, again all without leaving the game you're in.

Onto the home screen then, the layout is similar to the PlayStation 4, but with an updated, clean look optimised for 4K displays. A new 'Explore' tile will give an overview of all of your games, as well as offering news, stories and media and news from official channels. The feature is said to be "in testing for the US at launch" though, so not every region will have this feature right away.

A quick look at PlayStation Store and sharing a screnshot ends the video, as well as offering us a glimpse at the new features for message writing using the DualSense, with the system now supporting Voice Dictation.

You can check out the full video for yourself below. PlayStation 5 is set for launch on November 12 in the US, Canada, Mexico, Japan, Australia, New Zealand and South Korea and November 19 for the UK and everywhere else.