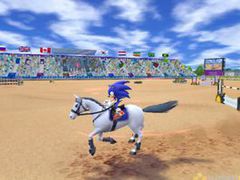 In the early stages of Mario & Sonic at the London 2012 Olympic Games development, SEGA Japan considered creating a peripheral to launch alongside the game.

“In the very early stage of this project, we even considered creating a new peripheral that works – that matches best for this game” the developer told VideoGamer. “We always try to look for new alternatives or possibilities.”

It wasn’t elaborated as to what form this might have taken, or whether it would have been anything more than a plastic Wii remote add-on. SEGA has a winning formula with their Olympic Games series, however, and it’s not surprising to see the idea scrapped.

VideoGamer recently went hands on with the 3DS version of the game, and you can read our impressions here.

Mario & Sonic at the London 2012 Olympic Games is out for Wii and 3DS next year.