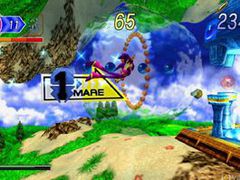 NiGHTS into dreams HD remake confirmed for release this autumn

16 years after NiGHTS into dreams was released on the SEGA Saturn, SEGA has confirmed that an HD remake is coming to Xbox LIVE Arcade, PSN and PC this autumn.

The new version will feature improved HD graphics and a 16:9 aspect ratio, leaderboards, trophies and achievements.

Fans of the original will also be able to play with the classic Saturn graphics intact.

“The SEGA Saturn offered many unique gaming experiences, and NiGHTS into dreams stands out as one of the most recognisable titles that found a home on the system,” said Chris Olson, vice president of Digital Business at SEGA. “We’ve gotten a lot of requests about this game over the years, and are very happy to be able to give both former Saturn owners and new players a chance to play it in its most beautiful form to date this autumn.”