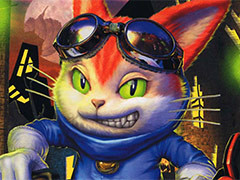 Updated on January 6, 2015 by David Scammell

Microsoft has abandoned its trademark for Blinx, the time-sweeping cat who first appeared on the original Xbox.

Initially positioned as Microsoft’s rival to Mario and Crash Bandicoot, the Xbox mascot appeared in two games that saw players taking control of time while armed with a vacuum cleaner.

The original game, which released in late 2002, was touted as only being possible on Xbox thanks to the console’s built-in hard drive. A sequel arrived two years later.

But after a 10 year break it seems that Microsoft has finally laid Blinx to rest, having cancelled the trademark on December 26.

The dream for a third game, it seems, is finally hoover.